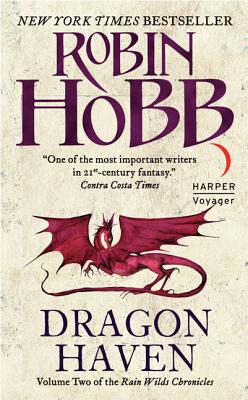 “A full master of the epic fantasy.”
—Tulsa World

One of the world’s most acclaimed fantasists, New York Times bestselling author Robin Hobb returns to the world of her popular “Tawny Man” trilogy with Dragon Haven—the second book, following Dragon Keeper (“Imaginative, literate, and compassionate from first page to last” —Booklist) in an epic adventure about the resurgence of dragons in a world that both needs and fears them. Hobb, whose Soldier Son Trilogy (Shaman’s Crossing, Forest Mage, Renegade’s Magic) has won raves from critics, fans, and peers alike, returns to the Rain Wilds with Dragon Haven, and readers of Raymond Feist, Terry Brooks, and Lois McMaster Bujold will eagerly follow.

“Hobb’s characterization continues to be top-notch, particularly with Thymara, the outcast teenage girl. Her self-awareness and surety is a delight and her insistence on belonging to no one but herself is simply wonderful.”
— Romantic Times

“Hobb creates a completely alluring portrait of dragons and their culture.”
— Bellingham Herald on DRAGON HAVEN

“Hobb has a deft hand with accessible and sympathetic characters, regardless of their fantasy trappings, and he makes effective use of the divide between what the reader knows and what the characters know to build tension.…A quick and fun read”
— Miami Herald on DRAGON HAVEN

“Hobb’s strength has always been her ability to create compelling characters to inhabit her richly detailed worlds. The Rain Wilds Chronicles is no exception.”
— Shroud Magazine Book Reviews on DRAGON KEEPER and DRAGON HAVEN