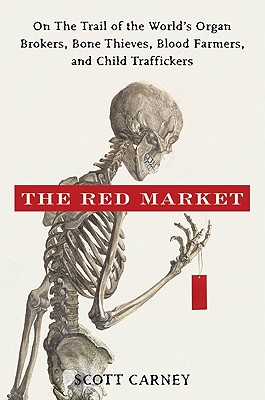 On the Trail of the World's Organ Brokers, Bone Thieves, Blood Farmers, and Child Traffickers

Award-winning investigative journalist and contributing Wired editor Scott Carney leads readers on a breathtaking journey through the macabre underworld of the global body bazaar, where organs, bones, and even live people are bought and sold on The Red Market. As gripping as CSI and as eye-opening as Mary Roach’s Stiff, Carney’s The Red Market sheds a blazing new light on the disturbing, billion-dollar business of trading in human body parts, bodies, and child trafficking, raising issues and exposing corruptions almost too bizarre and shocking to imagine.

Scott Carney is an investigative journalist with a decade of experience living and researching in India. He is a contributing editor at Wired magazine. His reporting has also appeared on NPR, CBC, BBC, and National Geographic TV, and in Mother Jones, Fast Company, Discover, and Foreign Policy. He lives in Long Beach, California.


Praise For The Red Market: On the Trail of the World's Organ Brokers, Bone Thieves, Blood Farmers, and Child Traffickers…

“The Red Market is a thrilling adventure into the global body business, with keen insight into the economics that drive it. Scott Carney investigates both our insatiable need for replacement human parts and the uncanny and often disturbing ways we go about getting them.”
— Chris Anderson, author of The Long Tail

“The Red Market is an unforgettable nonfiction thriller, expertly reported. Scott Carney takes us on a tremendously revealing and twisted ride, where life and death are now mere cold cash commodities.”
— Michael Largo, author of Final Exits: The Illustrated Encyclopedia of How We Die
or support indie stores by buying on
(This book is on backorder)
Copyright © 2020 American Booksellers Association