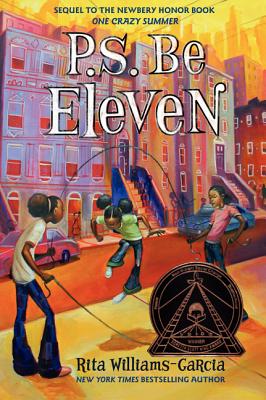 “This thoughtful story, told with humor and heart, rings with the rhythms and the dilemmas of the ‘60s through characters real enough to touch.” — Kirkus Reviews (starred review)

“Funny, wise, poignant, and thought-provoking, this will leave readers wanting more about Delphine and her sisters.” — Horn Book (starred review)

“..the Gaither sisters are an irresistible trio. Williams-Garcia excels at conveying defining moments of American society from their point of view—this is historical fiction that’s as full of heart as it is of heartbreak.” — Publishers Weekly (starred review)

“P.S. Be Eleven is a must-read for fans of the first book, but it can also stand alone as an engrossing novel that will leave readers pondering important issues of race, gender, and identity.” — School Library Journal (starred review)

PRAISE FOR ONE CRAZY SUMMER: “In One Crazy Summer Williams-Garcia presents a child’s-eye view of the Black Panther movement within a powerful and affecting story of sisterhood and motherhood. — Monica Edinger, writing in The New York Times

PRAISE FOR ONE CRAZY SUMMER: “One Crazy Summer is a genuine rarity: a book that is both important in its contents and utterly engaging in its characters…with the tremendous bonus of being beautifully written.” — Linda Sue Park, Newbery Medal–winning author of A Single Shard

Praise for P.S. BE ELEVEN: “P.S. Be Eleven is a must-read for fans of the first book, but it can also stand alone as an engrossing novel that will leave readers pondering important issues of race, gender, and identity.” — School Library Journal (starred review)

PRAISE FOR ONE CRAZY SUMMER: “Delphine is the pitch-perfect older sister, wise beyond her years, an expert at handling her siblings...while the girls are caught up in the difficulties of adults, their resilience is celebrated and energetically told with writing that snaps off the page” — Kirkus Reviews (starred review)

PRAISE FOR ONE CRAZY SUMMER: “Regimented, responsible, strong-willed Delphine narrates in an unforgettable voice, but each of the sisters emerges as a distinct, memorable character, whose hard-won, tenuous connections with their mother build to an aching, triumphant conclusion.” — Booklist (starred review)

PRAISE FOR ONE CRAZY SUMMER: “The setting and time period are as vividly realized as the characters, and readers will want to know more about Delphine and her sisters after they return to Brooklyn...” — Horn Book (starred review)