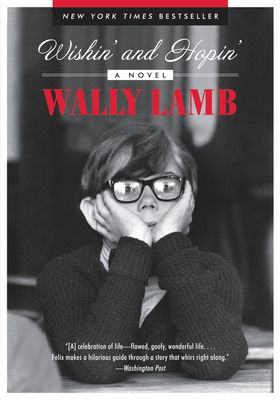 Wally Lamb, the beloved #1 New York Times bestselling author of The Hour I First Believed, I Know This Much Is True, and She’s Come Undone, delivers a holiday treat with Wishin’ and Hopin’—an unforgettable novella that captures the warmth and joy of the holiday season. Poignant and hilarious, in a vein similar to Jean Shepherd’s A Christmas Story and David Sedaris’s The Santaland Diaries, Lamb’s Christmas tale focuses on a feisty parochial school fifth grader named Felix Funicello—a distant cousin of the iconic Annette!

Praise For Wishin' and Hopin': A Novel…

“In the hands of Wally Lamb, what emerges isn’t an apology but a celebration of life...Felix makes a hilarious guide through a story that whirs right along.” — Washington Post

“Lamb’s rich panoply of details...render this novel first-rate escapism just begging for a comforter and a cup of tea.” — Minneapolis Star Tribune

“Lamb gets Felix’s voice just right, and he does a spot-on job of evoking the special joys and trials of parochial school in the ‘60’s” — St. Petersburg Times

“Lamb’s vividly detailed portrait of the 1960’s and the inner workings of a Catholic schoolboy’s mind puts his first Christmas book on par with his previous three novels.” — Miami Herald

“Lamb...proves he can be short, sweet and funny” — USA Today

“Wishin’ and Hopin’ from Wally Lamb reminds us of what innocence was like.” — Body and Soul

“Both heartwarming and laugh-out-loud funny…a cast of characters that are both uproarious and unforgettable…a poignant reminder that family and friends are the greatest gift of all.” — Hartford Books Examiner

We might as well call Wally Lamb the man with the golden pen...[Wishin’ and Hopin’] will leave you laughing and thinking nostalgically about your own school days and holidays past” — BookPage

“Lamb is a very good writer, and Wishin’ and Hopin’ is a charming read with a genuinely funny ending.” — Houston Chronicle

“Humorous and heartwarming…clever and well-written…A fun trip down memory lane from a skilled writer. The stocking stuffer might just become a cherished possession.” — Columbus Dispatch

“Charming…. Full of pop-culture references of the day…this will have broad appeal.” — Library Journal