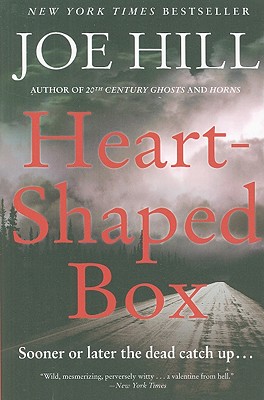 Aging death-metal rock legend Judas Coyne is a collector of the macabre: a cookbook for cannibals...a used hangman's noose...a snuff film. But nothing he possesses is as unique or as dreadful as his latest purchase off the Internet: a one-of-a-kind curiosity that arrives at his door in a black heart-shaped box...a musty dead man's suit still inhabited by the spirit of its late owner. And now everywhere Judas Coyne goes, the old man is there—watching, waiting, dangling a razor blade on a chain from his bony hand.


Praise For Heart-Shaped Box: A Novel…

[Hill]’s got horror down pat, and his debut is hair-raising fun.” — Kirkus Reviews

“You can’t go wrong with Heart-Shaped Box.” Top Five Fiction-Books of 2007 — The Observer

“A fast-paced journey on wheels borrowed from hell’s used-car lot, and there aren’t a lot of comfort breaks...The pictures [Hill] painted colored my dreams and darkened my mood even after I’d put the book down.” — Cleveland Plain Dealer