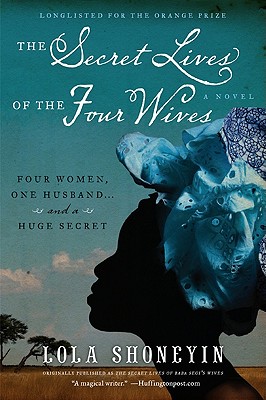 The Secret Lives of the Four Wives

“There is nothing quite so tantalizing as a glimpse into another culture. With disarming wit and grace, Shoneyin tells the story of a modern Nigerian man and his four wives, the latest of whom, Bolanle, is causing no end of disruption in the household. Deeply political without being corrosive, this is an intimate and compassionate view of social life in Nigeria. Lola Shoneyin has penned a splendid first novel!”
— Jennie Turner-Collins, Joseph-Beth Booksellers, Cincinnati, OH
View the List

African-born poet Lola Shoneyin sheds a fascinating light on the little-known world of polygamy in modern-day Nigeria, in her powerful and thought-provoking debut novel, The Secret Lives of the Four Wives (previously titled The Secret Lives of Baba Segi’s Wives). Fans of The 19th Wife and HBO’s Big Love will be enthralled by this riveting tale of a prosperous African family thrown into turmoil when the patriarch adds a young, well-educated fourth wife into the mix who threatens to expose the other wives’ deepest, darkest secrets.

Lola Shoneyin's work includes three books of poems: So All the Time I Was Sitting on an Egg (1997), Song of a Riverbird (2002) and For the Love of Flight (2010) and two children's books: Mayowa and the Masquerades (2010) and Iyaji, the Housegirl (2014). Her debut novel, The Secret Lives of Baba Segi's Wives (2010), was long-listed for the 2011 Orange Prize for Fiction and won the PEN Oakland 2011 Josephine Miles Literary Award. After teaching both in Nigeria and abroad for many years, Shoneyin now lives in Lagos, Nigeria and organises the Ake Arts and Book Festival.