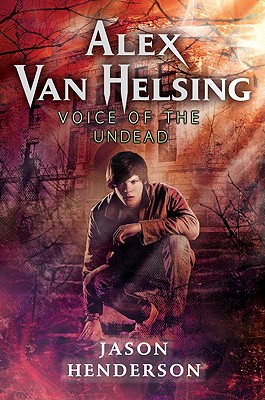 Voice of the Undead

Now that Alex is in the know about the deadly vampires that live—and hunt—around his boarding school, everything is different. Putting his talents to use, Alex is training with the Polidorium to become a vampire hunter, just like his Van Helsing ancestors. Sure, he’s only fourteen, but c’mon: This runs in his blood.

But Alex is wondering if he’ll live long enough to succeed. His archnemesis Elle, a vampire whose youthful appearance and blond hair disguise a rage that’s directed at him, is out to get him before a powerful leader called Ultravox arrives on the scene. Ultravox specializes in assassinations, but who is he targeting? As he dodges Elle’s attacks, Alex is on a mission to uncover Ultravox’s deadly plan before his friends and his school become collateral damage. There’s no time to report back; innocent lives hang in the balance, and it’s on Alex to act now—or else.


Praise For Alex Van Helsing: Voice of the Undead…

Henderson continues to spin a James Bond-type of action adventure story with a supernatural twist. It’s an entertaining read that is full of suspense and intrigue...fans will eat it up and look forward to the next chapter is this exciting series
— School Library Journal

This eagerly awaited second title in the Alex Van Helsing series continues the story with more compelling action, more character development, more worldbuilding, and more thrilling horror elements that meld together seamlessly. Readers will not be able to put it down. This excellent book is a must-have.
— Voice of Youth Advocates (VOYA) (starred review)

Praise for the Alex Van Helsing series: “Engaging and suspenseful.”
— Lisa Ko, author of The Leavers

Jason Henderson is the author of Alex Van Helsing: Vampire Rising, which was named Best of 2010 by VOYA, and Alex Van Helsing: Voice Of The Undead. He has written for games and comic books, including the Activision game Wolfenstein, the vampire action comic series Sword of Dracula, and the manga series Psy-Comm.