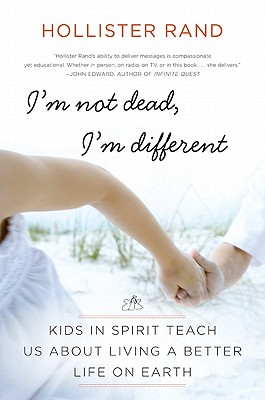 “Hollister Rand’s ability to deliver messages is compassionate, yet educational. Whether in person, on radio, TV, or in this book...she delivers.”
—John Edward, author of Infinite Quest

Psychic medium Hollister Rand is a magnet for opinionated young people who have lots to say—even after death. In I’m Not Dead, I’m Different, she shares with readers the uplifting and enlightening wisdom she has gained from the spirits of children taken from the earthly plane before their time, wisdom that far surpasses their years on Earth. Readers of John Edward, Sylvia Browne, Alison Dubois, and Conchetta Bertoldi will immediately recognize the worth in the guidance offered by these departed young ones, and anyone seeking solace or answers after the loss of a loved one will find great comfort in I’m Not Dead, I’m Different.

Hollister Rand is a clairvoyant, clairaudient, and clairsentient medium who is a regular contributor to InfiniteQuest dot com, the popular website launched by celebrity psychic medium John Edward. She was formerly a regular guest on KOST FM's Angels in Waiting and KBIG FM's Radio Medium.