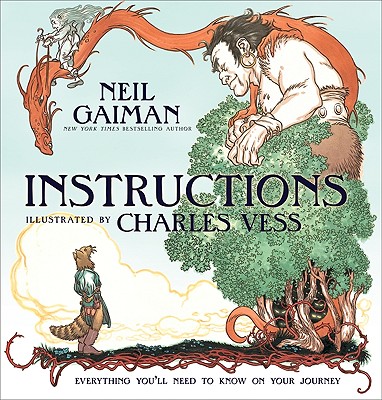 Share Neil Gaiman's beautifully illustrated Instructions with creative, artful graduates and other travelers of all ages.

"A perfect reminder to always be on the lookout for magic and wonder. Sometimes, we need those two things the most."*

In this breathtaking jacketed picture book, Neil Gaiman's lyrical poem guides a novice traveler through the enchanted woods of a fairy tale—through lush gardens, a formidable castle, and over a perilous river—to find the way home again.

Illustrated in full color by Charles Vess, Instructions features lush images of mythical creatures, magical landscapes, and canny princesses. Its message of the value of courage, wit, and wisdom makes it a perfect gift.

* Brightly, citing "Books That Teach Kids What It Means to Be a Kind Person"

“Like a more impish version of Dr. Seuss’s ‘Oh, the Places You’ll Go!” Gaiman’s book offers riddling advice that could be for young or old.”
— New York Times Book Review

“A magical, incantatory poem. It could be instructions for a child, a writer, a newly minted adult or an elder. It strikes immediately at the place where stories live and provides a feast of archetypes. ”
— Kirkus Reviews

Charles Vess's work has graced the pages of numerous publications and has been exhibited internationally. Some of his other books include Blueberry Girl by Neil Gaiman, a circle of cats and Seven Wild Sisters with Charles de Lint, a new edition of Peter Pan, and The Ladies of Grace Adieu with Susanna Clarke. His awards include a Mythopoeic, Ink Pot, two Chesley, two World Fantasy, and two Eisner awards.