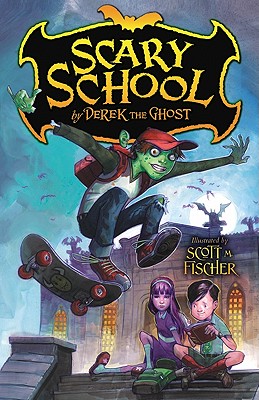 You think your school's scary?

Get a load of these teachers:

Ms. Fang, an 850-year-old vampire
Dr. Dragonbreath, who just might eat you before recess
Mr. Snakeskin—science class is so much more fun when it's taught by someone who's half zombie
Mrs. T—break the rules and spend your detention with a hungry Tyrannosaurus rex!

Gargoyles, goblins, and Frankenstein's monster on the loose
The world's most frighteningly delicious school lunch

The narrator's an eleven-year-old ghost!

Join Charles "New Kid" Nukid as he makes some very Scary friends—including Petunia, Johnny, and Peter the Wolf—and figures out that Scary School can be just as funny as it is spooky!

“For fans of the Wayside and Bailey School series, the Zack Files, [and] Ghostville Elementary.”
— Kirkus Reviews

“[T]his is a laugh-out-loud offering that should find a broad and appreciative audience among boys and girls alike.”
— Booklist