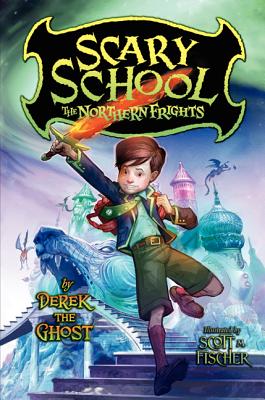 In The Northern Frights, the third book in the spooky Scary School series, Charles “New Kid” Nukid and his friends, including Lattie, a girl ninja, must fight an epic battle with an ice dragon to save their school. But first they must survive going to Scream Academy as exchange students. And that may be hard, because the Academy has an abominable snowman for a principal, a Headless Horseman as one of the teachers, and the students are yetis, trolls, and ogres!

Will Charles survive to make an ancient prophecy come to pass and save everyone? The illustrated Scary School trilogy by Derek the Ghost, with its mix of humor, scares, and adventure, is a perfect pick for middle-grade readers of the Wayside School series and the Zach Files books.

Praise for Scary School: “For fans of the Wayside and Bailey School series, the Zack Files, [and] Ghostville Elementary.” — Kirkus Reviews

Praise for Scary School: “[T]his is a laugh-out-loud offering that should find a broad and appreciative audience among boys and girls alike.” — Booklist

Praise for Scary School: “I died laughing. Weird monsters in silly situations. Why didn’t I think of that?” — Dan Gutman, author of My Weird School and The Genius Files