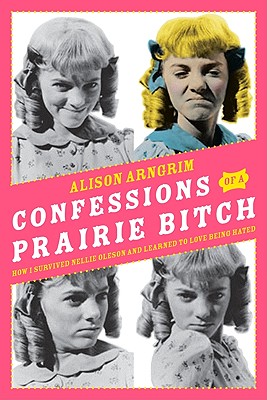 Confessions of a Prairie Bitch

How I Survived Nellie Oleson and Learned to Love Being Hated

Confessions of a Prairie Bitch is Alison Arngrim’s comic memoir of growing up as one of television’s most memorable characters—the devious Nellie Oleson on the hit television show Little House on the Prairie. With behind-the-scenes stories from the set, as well as tales from her bohemian upbringing in West Hollywood and her headline-making advocacy work on behalf of HIV awareness and abused children, Confessions of a Prairie Bitch is a must for fans of everything Little House: the classic television series and its many stars like Michael Landon and Melissa Gilbert; Gilbert’s bestselling memoir Prairie Tale... and, of course, the beloved series of books by Laura Ingalls Wilder that started it all.

Praise For Confessions of a Prairie Bitch: How I Survived Nellie Oleson and Learned to Love Being Hated…

“Arngrim, decades past her ‘Little House On The Prairie’ years, dishes lots of great on-set stories, talks about what being a kid actor in the 1970s was actually like and discusses her own painful family history with frankness and humor....Delightful.”
— NPR.org

“Spunky Alison Arngrim, who played Nellie [Oleson], gets my kudos...Alison has a knack for yanking people’s chains in a good way. And her new bestselling memoir, Confessions of a Prairie Bitch, is such an absorbing read, I just had to give the woman a call for some bitch talk.”
— Michael Musto, Village Voice

“’Confessions of a Prairie Bitch’ says it all: Neither Arngrim nor Nellie could ever be called boring.”
— Entertainment Weekly

“Courage, moxie, chutzpah , cajones. Alison Arngrim has them all in spades. In “Confessions of a Prairie Bitch,” she bares her soul and manages to share her story with grace, dignity, and her inimitable humor. Simply put, I love this book and I love her. ”
— Melissa Gilbert

“Alison Arngrim, familiar to a generation of TV viewers as the petulant Nellie Oleson of ‘Little House On The Prairie,’ is dishing the dirt on Walnut Grove.”
— AOL PopEater

Arngrim looks back on playing the pint-sized sociopath in her memoir, “Confessions of a Prairie Bitch,” in which she merrily recalls show creator and star Michael Landon, that infamous blond wig, and how Nellie inspired her lifelong obsession with villainy.”
— New York Post

“Alison Arngrim is a talented actress and an author who has patched together a meaningful life and created a book whose pages…fly.”
— Phyllis Diller

“As a city bitch myself, I loved this book! It’s nice to see how the other half lives. Alison Arngrim’s memoir is a hilarious, moving, and dishy Hollywood tale.”
— Margaret Cho

“Alison Arngrim is a fine actress and a true comedienne. She has always been the kind of ‘Bitch’ who tells it like it is. So, readers beware, you are in for an eye-full of reality told with a remarkable sense of humor.”
— Carol Channing

“Whoa, Nellie! “Confessions of a Prairie Bitch” is a book that you will keep stored under a haystack in the barn, to dip into whenever you need a shot of something that will keep you down on the farm.”
— Bruce Vilanch

Alison Arngrim starred as Nellie Oleson for seven years on the TV series Little House on the Prairie. She also guest-starred on The Love Boat, Fantasy Island, and the NBC movie of the week I Married Wyatt Earp. She has appeared in numerous films and plays, and her stand up comedy show, "Confessions of a Prairie Bitch," has become a worldwide phenomenon. Arngrim also volunteers for nonprofit organizations such as AIDS Project Los Angeles and the National Association to Protect Children. She lives in Los Angeles with her husband.