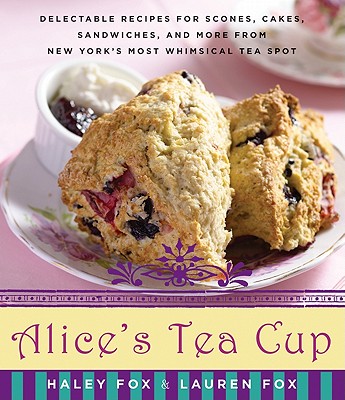 Restaurateurs Haley Fox and Lauren Fox share more than 80 recipes for scones, cakes, sandwiches, and more from their charming and wildly popular Alice’s Tea Cup restaurants in New York City. In Alice’s Tea Cup, the Fox sisters tickle the taste buds with sweets, baked goods, and savories while divulging the unique tea-making and enjoying philosophy that has made their whimsical Manhattan tea spots favored destinations for locals and tourists alike.

In the “Alice’s” book, you’ll find recipes both delightful and down to earth. In only six steps, you can re–create the shop’s popular berry scones… A savory and crunchy cumin carrot sandwich takes just minutes. The vanilla tea–infused granola or the blueberry lemon cake are, well, a piece of cake. — NY Daily News

One of the Best NYC Cookbooks of 2010 — New York magazine

Haley Fox, a New York University film school graduate, started her career as an aspiring director. She went into film development at MGM in California and worked with various film companies before moving back to New York to open Alice's Tea Cup with her husband, Michael Eisenberg, and her sister. She lives with Michael and their two children in Manhattan.

Lauren Fox started her career as an actress and a writer, splitting her time between Los Angeles and New York, before opening Alice's Tea Cup with her sister. She has appeared in many independent films, such as Pi, Revolution Summer, and Noon Blue Apples. She now juggles her time between acting, writing, and Alice's. She lives in Manhattan.