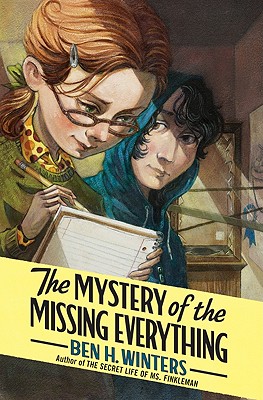 The Mystery of the Missing Everything (Hardcover)

There has been a shocking crime at Mary Todd Lincoln Middle School.

In a glass case in the front hall, a trophy—the trophy, the first trophy ever won in the school’s lackluster competitive history—has been stolen.

Even more horrifying, an outraged Principal Van Vreeland has canceled everything fun until the trophy is back, including the eighth graders’ long-awaited, once-in-a-lifetime field trip to Taproot Valley. Rock climbing, ropes courses, ecology hikes, s’mores . . . all gone!

Luckily, Bethesda Fielding is on the case. As self-appointed sleuth extraordinaire, Bethesda’s confident she’ll be able to track down the culprit in no time and save her class trip! Except it seems like the more she searches for answers, the more mysteries she reveals. . . . Can Bethesda solve this baffling mystery—or are the eighth graders doomed for a Week of a Thousand Quizzes instead?

Ben H. Winters is an author and educator who has written plays and musicals for children and adults, as well as several books in the bestselling Worst-Case Scenario Survival Guide series. He is also the author of The Secret Life of Ms. Finkleman, Bedbugs, and the parody novels Android Karenina and the bestselling Sense and Sensibility and Sea Monsters. He lives in Indianapolis.


Praise For The Mystery of the Missing Everything…

PRAISE FOR THE MYSTERY OF THE MISSING EVERYTHING: “Middle-school antics and general good humor will surely strike the right chord.”
— Bulletin of the Center for Children’s Books

“The plot moves along in humorous and engaging style. Winters differentiates his large cast of characters by providing insights into a variety of adolescent vulnerabilities, making this a case that will interest both solid and reluctant mystery readers.”
— School Library Journal

“This is a just-plain-fun read that culminates in a wholly satisfying ending, and it will easily appeal to fans of Andrew Clements and Gordon Korman, as well as anyone who ever watched School of Rock or High School Musical and imagined putting on the best show ever.”
— Booklist
or
Not Currently Available for Direct Purchase
Copyright © 2020 American Booksellers Association