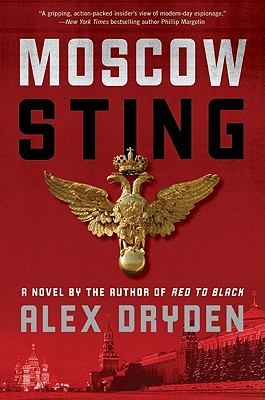 “Alex Dryden is a writer who can please everyone from fans of old LeCarré to students of current affairs. Moscow Sting is a thought-provoking and entertaining follow up to the terrific Red to Black.”
—James Grippando, New York Times bestselling author of Afraid of the Dark

Booklist places author Alex Dryden in “the top rank of espionage novelists.” His riveting Moscow Sting proves that the resounding critical acclaim awarded him for his debut, Red to Black, was no fluke. In this spellbinding sequel, former KGB colonel Anna Resnikov escapes to America where she must outwit CIA “friend” and KGB foe alike to survive. Alex Dryden has brought breathtaking new life to the spy novel in this blistering “ripped from the headlines” thriller that focuses on Russia’s chilling reemergence as a hostile superpower.

“Moscow Sting suggests [Dryden] has finished the crossover from journalist to full-fledged thriller writer. Keep an eye on Dryden. If he continues to infuse the genre with serious political insights and warnings, he could be the next John le Carré.”
— Richmond Times-Dispatch

“MOSCOW STING is a gripping, action-packed insider’s view of modern day espionage with a clever twist at the end. Ex-KGB Colonel Anna Resnikov is a terrific heroine, who I hope will return with future adventures.”
— Phillip Margolin, New York Times bestselling author of SUPREME JUSTICE

“Dryden follows up his superb debut, Red to Black (2009), with a riveting sequel... Red to Black reinvigorated the classic Cold War espionage genre. Moscow Sting, with its clever, devious, conflicted characters, its tension and verisimilitude, and its complex but fully plausible plot, is every bit as good.”
— Booklist (starred review)

“Alex Dryden is a writer who can please everyone from fans of old LeCarre to students of current affairs. MOSCOW STING is a thought-provoking and entertaining follow up to the terrific Red to Black. No sophomore slump here.”
— James Grippando, New York Times bestselling author of MONEY TO BURN

“This follow-up to Dryden’s debut thriller, RED TO BLACK, is a rarity: a sequel as good as its exceptional predecessor... An exceptional spy story. Boy, is this good!”
— Kirkus Reviews (starred review)

“Hands down, one of the most convincing spy stories you’ll ever read.”
— Lisa Black, author of TRAIL OF BLOOD