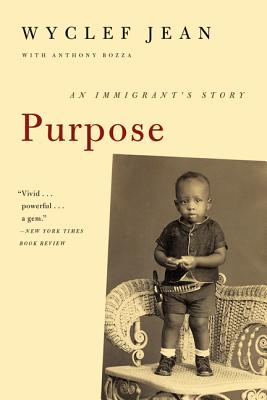 Purpose is Wyclef Jean’s powerful story of a life rooted in struggle, soul-searching, art, and survival.

In his own voice the multi-platinum musician and producer shares everything, from his childhood in Haiti to his rise to the top of the American music scene. For the first time ever, Wyclef reveals the behind-the-scenes story of the Fugees, including his partnership with Lauryn Hill and Pras Michel, the details of their award-winning album The Score, and the solo career that followed.

For fans of early Wyclef efforts like The Carnival or later albums like From the Hut, To the Projects, To the Mansion—and for fans of books like Jay-Z’s Decoded or Russell Simmons’ Super Rich—Wyclef’s Purpose is an inspiring, one-of-a-kind look at one of the world’s most talented artists.


Praise For Purpose: An Immigrant's Story…

“[A] riveting memoir . . . Jean is candid in chronicling the drama of the music business and his heartfelt anguish for his homeland while struggling with success and commitment.”
— —Booklist

“Jean’s passion for music, his fierce love for his family and for Lauryn Hill, his partner in the Fugees, and his deep and abiding devotion to his native country, Haiti, forcefully reach out and grab the reader.”
— —Publishers Weekly

Wyclef Jean is a multiplatinum Haitian musician and former member of the hip-hop trio the Fugees, as well as an actor and producer. Throughout his career, as a member of the Fugees, a collaborator with other musicians, and a solo artist, he has sold more than fifty million albums. He has worked with such artists as Whitney Houston, Michael Jackson, Carlos Santana, Eric Clapton, Paul Simon, T.I., Mary J. Blige, and Destiny's Child.

Anthony Bozza is the author of four New York Times Bestsellers, including Whatever You Say I Am: The Life and Times of Eminem, Slash, co-written with Slash and the #1 bestselling Too Fat to Fish, co-written with Artie Lange. Bozza was a staff writer and editor for Rolling Stone magazine for seven years, during which he profiled a diverse range of artists from Eminem and the Wu-Tang Clan to Trent Reznor and U2. He lives in New York City.