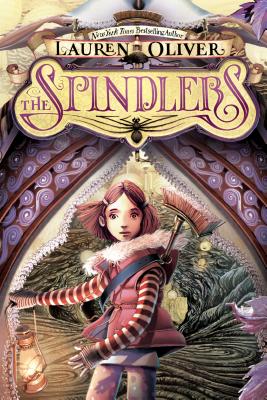 “With her second book for middle readers, following Liesl & Po, Oliver has another hit on her hands. When Liza's brother Patrick has his soul stolen by spider-like spindlers, and her overburdened mother dismisses everything she says as a child's fantasy, Liza takes it upon herself to travel Below to save Patrick and ends up embarking on a journey of self-discovery that will speak to anyone who's ever had 'childish fantasies.'”
— Melissa Oates, Fiction Addiction, Greenville, SC
View the List

Evocative of Alice in Wonderland, this novel from New York Times bestselling author Lauren Oliver is a bewitching story about the reaches of loyalty and the enduring power of hope. Perfect for fans of the author’s other middle grade novels: Liesl & Po and the Curiosity House series.

Looking across the breakfast table one morning, twelve-year-old Liza feels dread wash over her. Although her younger brother, Patrick, appears the same, Liza knows that he is actually quite different. She is certain that the spindlers—evil, spiderlike beings—came during the night and stole his soul. And Liza is also certain that she is the only one who can rescue him.

Armed with little more than her wits and a huge talking rat for a guide, Liza descends into the dark and ominous underground to save Patrick's soul. Her quest is far from easy: she must brave tree-snakes, the Court of Stones, and shape-shifting scawgs before facing her greatest challenge in the spindlers' lair, where more than just Patrick's soul is at stake.


Praise For The Spindlers…

“This imaginative fantasy emphasizes individual initiative and the power of hope and friendship. With strong, self-reliant female characters and well-defined action, this is a strong addition to fantasy collections.” — School Library Journal (starred review)

“Oliver’s fluid, poetic prose elevates this tale above the genre, often imparting weight to the simplest sentences....this is sure to win over middle-grade readers.” — Bulletin of the Center for Children’s Books (starred review)

Praise for Liesl & Po: “Classic fairy tale elements weave throughout this spirited, old-fashioned adventure. Invigorating and hopeful, this novel testifies to the power of friendship and generosity to conquer greed and depression.” — Publishers Weekly (starred review)

Praise for Liesl & Po: “With her third book, Lauren Oliver (Before I Fall; Delirium) creates another highly original world, this one for middle-grade readers. Oliver introduces orphans Liesl and Will, a touch of magic, some delectable coincidences, and friendship that stretches from the Living Side to the Other Side.” — Shelf Awareness

Praise for Liesl & Po: “Liesl & Po by Lauren Oliver brings much-needed magic to an increasingly neglected age group. It’s books like this, with its classic quest plot, intertwined with lyrical metaphysics, that can set a child up for life.” — The Sunday Telegraph