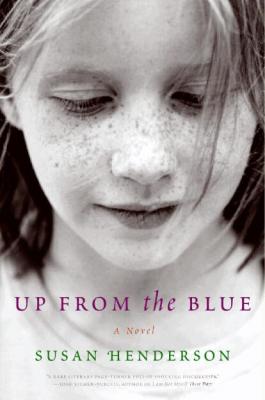 Up from the Blue

“Elegant and engrossing….Henderson is a talent to watch.”

“This is not a book you’ll soon forget.”

The gripping debut novel from Litpark.com founder and Pushcart Prize-nominee Susan Henderson, Up From the Blue is a dazzling tour de force that unfolds against the backdrop of 1970s America—a tumultuous era of desegregation, school busing, and the early rise of modern-day feminism. The story of an imaginative young girl struggling to make sense of her mother’s mysterious disappearance, Up From the Blue is enthralling fiction that delves into complex family relationships, in the vein of Jennifer McMahon, Katrina Kittle, and Laura Kasischke.


Praise For Up from the Blue: A Novel…

“Inescapable sadness is threaded through with surprising moments of joy, in an intimate story that dispels the usual notions of victims and oppressors.” — Columbus Dispatch

“Henderson beautifully portrays this family in crisis through its most voluble and consistent member. Rapturous prose reveals young Tillie’s heart as she yearns for the mother who will make her world better but who can’t seem to mend her own tortured soul. A triumphant debut.” — Library Journal

“Henderson shows remarkable compassion in her debut novel, an affecting portrait of depression through a child’s eyes.” — Booklist

“A haunting tale of the terrible ways in which we fail each other; of the whys, the what ifs, and the what nows. This is not a book you’ll soon forget.” — Sara Gruen, New York Times bestselling author of Water for Elephants

“Up from the Blue deftly portrays a family with contradictions we can all relate to—it’s beautiful and maddening, hopeful and condemning, simple, yet like a knot that takes a lifetime to untangle. You will love it completely, even as it hurts you…it’s a heartbreaking, rewarding story that still haunts me.” — Jamie Ford, New York Times bestselling author of Hotel on the Corner of Bitter and Sweet

“A rare literary page-turner full of shocking discoveries and twists. Susan Henderson has created a remarkable narrator—as memorable for her feistiness as for her tenderness. Up From the Blue is going to be one of this year’s major debuts.” — Josh Kilmer-Purcell, author of I Am Not Myself These Days

“Susan Henderson’s debut novel Up From the Blue is elegant and engrossing….Tillie Harris is both tender and tough, charming and filled with wonder by the difficulties she must overcome. Henderson is a talent to watch.” — Danielle Trussoni, author of Angelology and Falling Through the Earth

“Up From the Blue is a heart-wrenching, tender story with a mystery that kept my pulse racing. What a joy to discover Tillie Harris, the most memorable, charming and plucky narrator in fiction since Scout Finch.” — Jessica Anya Blau, author of The Summer of Naked Swim Parties

“Haunting and unsettling, Up From the Blue’s real alchemy is the way it uncovers the stories that alternately save us and keep us from our real truths. Incandescently written, this is a stunning debut with heart.” — Caroline Leavitt, author of Girls in Trouble and Pictures of You

“Up from the Blue is a beautiful, haunting, spirited debut, charged with secrets and deep longing. Susan Henderson has written a moving love story, a portrait of that deep lasting love between mother and daughter.” — Julianna Baggott, author of Girl Talk, The Madam, and Which Brings Me to You

“A remarkable debut, not just for the uncanny accuracy and charm of eight-year-old Tillie’s narrative voice, but for the way the characters reveal unexpected angles of themselves that somehow make them realer than real. Up from the Blue lingers in the mind.” — Mark Childress, author of Crazy in Alabama

Susan Henderson is a four-time Pushcart Prize nominee and the recipient of an Academy of American Poets Prize. She is the author of two novels, The Flicker of Old Dreams and Up from the Blue, both published by HarperCollins. Susan lives in Kings Park, New York and blogs at the writer support group, LitPark.com.

1. Up From the Blue features a frame story (a story within a story). How do the chapters about grown Tillie enrich the story of 8-year-old Tillie? How would the novel be different if the author had only written about young Tillie?

2. Eight-year-old Tillie is introduced as a biter who liked to leave a mark. What was your initial impression of her? What do you think she craved?

3. Describe the difference between how Phil and Tillie experienced the same events. Which character was more sympathetic to you? And does it surprise you that the same events could impact siblings so differently?

4. Do you think it’s realistic that no one knew what was happening inside the Harris family’s home? Why do you suppose Phil and Tillie didn’t tell a neighbor or a teacher?

5. Throughout the novel, Tillie made references to the neighbors who seemed to live such peaceful lives, but through her contact with the other children, she became aware of divorce, bullying, and racism. In what way is it helpful to see Tillie’s situation in the context of the larger community?

6. What did you learn about Tillie by the people she’s drawn to and how close she allows herself to get to them?

7. When Tillie discovered her mother in the secret room, did you believe what was happening?

8. Why do you think Mara was so alive in the secret room but hardly functioning when she lived with the rest of the family?

9. Were you surprised to learn why Mara disappeared? And were you frustrated with the characters for their actions or inactions?

10. What was the significance of the ruby cup to Tillie, and how did that change near the end of the book?

11. Mara talked about the woman in the golden gown to communicate her dreams and her regrets. Where is the line between self-fulfillment and sacrifice for others?

12. Eight-year-old Tillie’s story ended with the family walk. Did this gain significance when you read the final chapter of the book?

13. How did you find the final scene between grown Tillie and her father? What was your reaction to Tillie’s statement, “I want him to be as powerful a father as he is a scientist”?

14. By the end of the story, Tillie seemed more open to reconnecting with her father, while Phil had gone his own way. What would you have done?

15. In the closing chapter, Tillie wonders what her mother might have become if they’d offered her help? Do you think she could have been helped?

16. What kind of mother do you think Tillie will be? What makes you feel hopeful or pessimistic about her future? Do you think children from unstable upbringings struggle about starting families of their own?