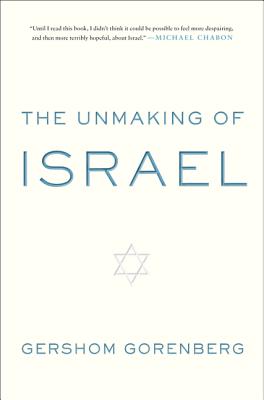 The Unmaking of Israel

Prominent Israeli journalist GershomGorenberg offers a penetrating and provocativelook at how the balance of power in Israel has shifted toward extremism,threatening the prospects for peace and democracy as the Israeli-Palestinianconflict intensifies. Informing his examination using interviews in Israel andthe West Bank and with access to previously classified Israeli documents, Gorenberg delivers an incisive discussion of the causes andtrends of extremism in Israel’s government and society. Michael Chabon, Pulitzer Prize-winning author of The AmazingAdventures of Kavalier and Clay, writes, "until I read The Unmaking of Israel, I didn't think it could bepossible to feel more despairing, and then more terribly hopeful, about Israel,a place that I began at last, under the spell of GershomGorenberg's lucid and dispassionate yet intenselypersonal writing, to understand."

Praise For The Unmaking of Israel…

“At the core of the book lies a terrifying analogy: Israel as Pakistan, a country whose government has empowered a lawless, fanatical religious movement now subverting the very state that empowered it. Is the analogy apt today? No, but Gorenberg makes a frighteningly convincing case that it might be soon.”
— Peter Beinart, Newsweek

“Until I read The Unmaking of Israel, I didn’t think it could be possible to feel more despairing, and then more terribly hopeful, about Israel, a place that I began at last, under the spell of Gershom Gorenberg’s lucid and dispassionate yet intensely personal writing, to understand.”
— Michael Chabon

“In a more forward-looking country, one less devoted to hounding its critics out of existence, legislators would roam the halls of the Knesset carrying well-thumbed copies of Gershom Gorenberg’s The Unmaking of Israel.”
— The National

“Gorenberg provides a deft but penetrating and highly nuanced account of the recent history and current politics of Israel.  . . . He issues a heartfelt and heart-rending plea for the repair of the Jewish democracy.”
— The Jewish Journal

“An important book.  . . . Essential reading for those in the U.S. who view Israel in simple terms as ‘the only democracy’ in the Middle East. Gorenberg has provided a roadmap for a better future. One hopes that this deeply personal critique will receive the consideration it deserves.”
— The Washington Independent Review of Books

“Gorenberg presents the definitive case for viewing the occupation as more of a threat to Israel than an asset. . . . Required reading for anyone about to embark on a trip to Israel.”
— Haaretz

“[Gorenberg’s] book is solidly researched and elegantly argued. It combines history and analysis, love and anger. Somehow, it avoids moralism. If you read one book on Irsael, this shoud be it.
— Dissent

Gershom Gorenberg has written for The New York Review of Books, The New York Times Magazine, The Atlantic, and, in Hebrew, Ha'aretz. He is a senior correspondent for The American Prospect and blogs at SouthJerusalem.com. Gorenberg is the author of The Accidental Empire: Israel and the Birth of the Settlements, 1967-1977 and The End of Days: Fundamentalism and the Struggle for the Temple Mount. He lives in Jerusalem with his wife and their three children.