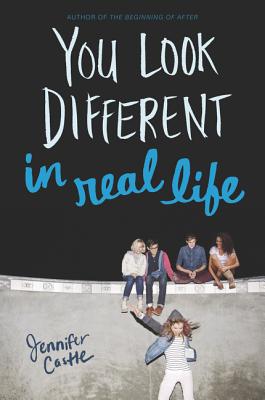 You Look Different in Real Life

Readers of John Green, Sarah Dessen, and Laurie Halse Anderson will be touched by the emotional depth and realistic characters of Jennifer Castle’s teen novel You Look Different in Real Life.

Justine charmed the nation in a documentary film featuring five kindergartners. Five years later, her edgy sense of humor made her the star of a second movie that caught up with the lives of the same five kids.

Now Justine is sixteen, and another sequel is in the works. Justine isn’t ready to have viewers examining her life again. She feels like a disappointment, not at all like the girl everyone fell in love with in the first two movies. But, ready or not, she and the other four teens will soon be in front of the cameras again.

Smart, fresh, and funny, You Look Different in Real Life is an affecting novel about life in an age where the lines between what’s personal and what’s public aren’t always clear. Now available in paperback with a fresh new look!


Praise For You Look Different in Real Life…

“This provocative novel explores what makes observing strangers fumbling through life so addictively entertaining-and so eye-opening, too.” — The Horn Book

“Although the story is told from Justine’s perspective, her four classmates are equally complex and interesting, with deep personal conflicts. Castle succeeds in providing suspense and drama as each character’s emotional baggage is unpacked on and off the screen.” — Publishers Weekly

Jennifer Castle's first novel, The Beginning of After, was named an American Library Association Best Fiction for Young Adults selection and a Chicago Public Library "Best of the Best" Book. She wrote many unproduced movie and TV scripts before returning to her first love, fiction . . . but she's still hooked on film and the way we can find and tell our stories with images. She lives with her family in New York's Hudson Valley.