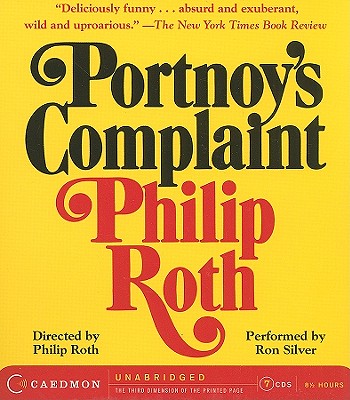 Caedmon celebrates the 40th anniversary of this American classic, read by Ron Silver and directed by the author, now on CD for the first time!

Portnoy’s Complaint is the famously outrageous confessions of Alexander Portnoy, the Huck Finn of Newark, who is thrust through life by his unappeasable sexuality, yet held back by the iron grip of his unforgettable childhood. Forty years after it was first published, it remains a classic of American literature, a tour de force of comic and carnal brilliance, and is probably the funniest book about sex ever written. Portnoy’s Complaint also holds the distinction of being one of The Modern Library’s “100 Best Novels” of the twentieth century.

Ron Silver, a Tony award-winning stage actor, has starred in numerous films including Reversal of Fortune, and Enemies: A Love Story, as well as the television series Wiseguy.  He was a founder of The Creative Coalition, and President of Actors' Equity Association.