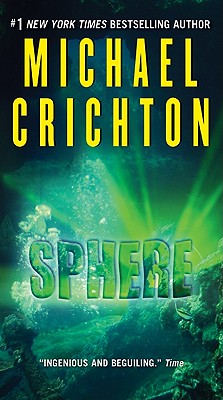 “Crichton keeps us guessing at every turn in his best work since The Andromeda Strain.”
—Los Angeles Times

“Sphere may be Crichton’s best novel, but even if it ranked only second or third, it would be a must for suspense fans.”
—Miami Herald

A classic thriller from #1 New York Times bestselling author Michael Crichton, Sphere is a bravura demonstration of what he does better than anyone: riveting storytelling that combines frighteningly plausible, cutting edge science and technology with pulse-pounding action and serious chills. The gripping story of a group of American scientists sent to the ocean floor to investigate an alien ship, only to confront a terrifying discovery that defies imagination, Sphere is Crichton prime—truly masterful fiction from the ingenious mind that brought us Prey, State of Fear, and Jurassic Park.

Praise for STATE OF FEAR: “One of our most gifted popular novelists... Crichton’s fecund imagination and considerable storytelling talent have brought pleasure to millions. A master.” — Los Angeles Times