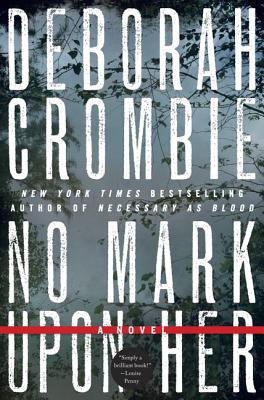 No Mark upon Her (Duncan Kincaid/Gemma James Novels #14)

A brilliantly conceived and executed, deeply atmospheric mystery, No Mark Upon Her embroils Kincaid and James in the case of the puzzling drowning of a rower, a Met detective, on the Thames. A finely-hued and twisting tale of psychological suspense—a story rich in deadly secrets, salacious lies, and unexpected betrayals—No Mark Upon Her is everything Crombie’s fans have come to expect from this exceptional writer…and more.

“Crombie is very talented at putting together a richly atmospheric whodunit.... [A]s a creator, she energetically inhabits the many strange worlds she shows her readers....”
— Washington Post

“Ms. Crombie again has turned out a gripping and nicely tailored mystery and added another chapter to her chronicle of Kincaid and Jones.”
— Washington Times

“No Mark Upon Her is again deserving of fans’ devotion due largely to her intelligent, subtle wit and above all, her meticulous attention to detail, from sculling equipment and competitive jealousy to a 3-year-old’s birthday party meltdown to the deep bond between a man and his dog.”
— Miami Herald

“Her writing is sophisticated and her suspense taut.”
— Milwaukee Journal Sentinel

[A] psychological thrill-ride that explores the allure of power, the pull of jealousy, and the seduction of greed.
— The Tuscon Citizen

This is a lovely, satisfying British police procedural with many relationship subplots that lend texture.
— Suspense magazine