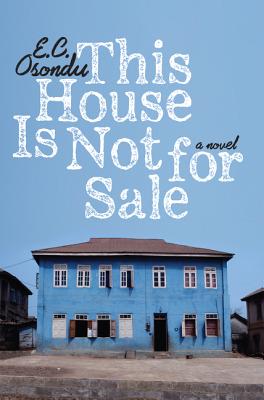 “The home in the magisterial This House Is Not For Sale becomes much more than a building. The structure defines and divides a family over generations. Osondu has more to say about life and love than most of the classic novels we adore.” — Essence

“Remarkable. . . . Though Osondu tips his hat to tradition, this book is a distinctive and singular achievement, all the more remarkable for being a debut novel.” — Jeffery Renard Allen, author of Song of the Shank

“A marvelous chorus of community voices chimes in, passionately commenting on the action. . . . Osondu uses the house as a prism through which to depict the events of the neighborhood, proving that our stories outlive the places we inhabit.” — Publishers Weekly (starred review)

“Vivid. . . . Beguiling in their simplicity and resonant in their universal themes, This House is Not for Sale offers a striking appraisal of people’s basest ambitions.” — Booklist

“Osondu brings his characters to life with love. The dialogue, flavored by its ever-present chorus of unnamed voices, sparkles with humor, playful wickedness, and zest. Osondu gives us a strong and joyful sense of place in this novel. . . . A celebration of a place and its people.” — BookBrowse

“The timelessness of this ambitious debut reminds the reader of J. M. Coetzee’s Life & Times of Michael K. The characters, sheltered by a house from which they also try to shelter themselves, tell the stories of every one of us.” — Yiyun Li, author of The Vagrants

“A very modern, compassionate voice. . . . Osondu is ceaseless in his willingness to examine the human condition in all its glories and frailties.” — Kirkus