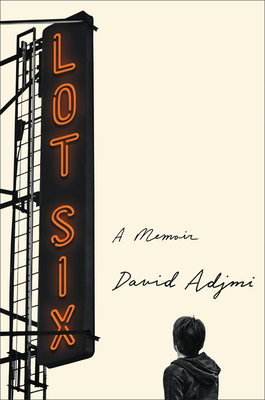 
Praise For Lot Six: A Memoir…

“Every single page of Lot Six has truths in it that I had never articulated to myself, and that I recognized immediately from my own crazy head [from my own life?], and felt so grateful for. It feels like reading Proust. David Adjmi is a genius.” — Elif Batuman, author of Pulitzer Prize finalist The Idiot

"Vibrant, edgy, scenic and exciting. . . .  Adjmi also emerges as a sensitive and faithful—and funny!—narrator who is keen to notice his own reactions to particular moments and perceptive about how his early experiences fostered a kaleidoscopic inner life that informed both the formation of his identity and the art he would later make.” — BookPage (starred review)

“Every page of Adjmi's memoir, his life story thus far, is stamped with the gifts of the awardwinning playwright he would become. . . . So suffused with Adjmi's skill for drama and spectacular vocabulary is this gimlet-eyed personal history of making and being made by art, it is emotionally vast and utterly triumphant.” — Booklist

“Lot Six is a deeply moving, completely riveting tour de force. With searing wit and heartbreaking honesty, Adjmi writes about the agonizing work of building an identity, and in doing so has crafted a shimmeringly beautiful love letter to art and those of us who need it to survive. Reading it I wept with recognition, and when I finished, I felt more alive—as if the book had worked some kind of magic spell on me.” — Heidi Schreck, playwright of Pulitzer Prize for Drama finalist What the Constitution Means to Me

“David Adjmi has written one of the great American memoirs, a heartbreaking, hilarious story of what it means to make things up, including yourself. What do you do if you don’t get the nurturing you need at home? Is it possible that art could help fill in the gaps? A wild tale of lack and lies, galling humiliations and majestic reinventions, this touching, coruscating joy of a book is an answer to that perennial question: how should a person be?” — Olivia Laing, author of Crudo and The Lonely City

“David Adjmi has written a transfixing, hilarious, and devastating memoir that is wholly unique. Like a match struck in the dark, it set me afire, illuminated aspects of my own self that I'd never faced. It is not often a book possesses this much pain, humor, and power. It is a tremendous artistic achievement and truly one of the best books I’ve ever read." — Melissa Febos, author of Whip Smart and Abandon Me

David Adjmi was called "virtuosic" by the New York Times and was named one of the Top Ten in Culture by The New Yorker in 2011. His plays have been produced and developed by the Royal Shakespeare Company, Soho Rep, Lincoln Center, Steppenwolf and many others.  He was awarded a Mellon Foundation grant, the Guggenheim Fellowship, the Whiting Writers’ Award, the Kesselring Prize for Drama, the Steinberg Playwright Award (the “Mimi”), McKnight and Jerome fellowships,  and the Bush Artists Fellowship, among others. He is the recipient of residencies from the Dora Maar House, American Academy of Rome, the Bogliasco Foundation, The MacDowell Colony, Corporation of Yaddo, Djerassi, UCross and others. He lives in Los Angeles.
Loading...
or support indie stores by buying on