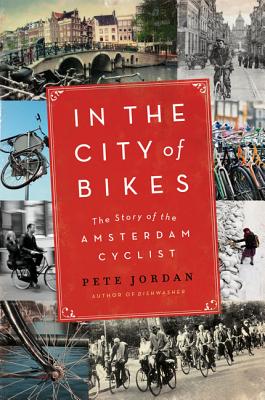 In the City of Bikes

The Story of the Amsterdam Cyclist

Pete Jordan, author of the wildly popular Dishwasher: One Man’s Quest to Wash Dishes in All Fifty States, is back with a memoir that tells the story of his love affair with Amsterdam, the city of bikes, all the while unfolding an unknown history of the city's cycling, from the craze of the 1890s, through the Nazi occupation, to the bike-centric culture adored by the world today

Pete never planned to stay long in Amsterdam, just a semester. But he quickly falls in love with the city and soon his wife, Amy Joy, joins him. Together they explore every inch of their new home on two wheels, their rides a respite from the struggles that come with starting a new life in a new country.

Weaving together personal anecdotes and details of the role that cycling has played throughout Dutch history, Pete Jordan’s In the City of Bikes: The Story of the Amsterdam Cyclist is a poignant and entertaining read.


Praise For In the City of Bikes: The Story of the Amsterdam Cyclist…

“A funny, engaging, and exhaustively researched tribute to Amsterdam’s unique biking history….Jordan is an honest, self-effacing narrator, and there’s much that’s lovably comic about his inauguration into Amsterdam cyclo-culture.” — Los Angeles Times

“A charming and quirky book....Jordan’s portrait of bicycle culture in Amsterdam gives a fascinating account of a viable alternative to dependence on cars.” — Christian Science Monitor

“This highly readable book illuminates the bicycle’s integral role in shaping both the psyche and the actual city of Amsterdam.” — Houston Chronicle

“For anyone contemplating visiting or living in The Netherlands, In the City of Bikes is a must read.” — New York Journal of Books

“Full of personal anecdote, self-deprecating humor, local lore and a history of cycling that positively bursts with enthusiasm, In the City of Bikes is both a memoir and an ode to bicycles — Shelf Awareness

“[W]hat could have been a straightforward history [is] something more special: history that doesn’t feel like history--just an enjoyable story from start to finish….An excellent choice for bikers and those who appreciate how a city’s history can be changed by the simplest of passions.” — Kirkus Reviews

“Jordan brings depth and color to a niche subject, delivering an engaging cultural history. By the end, readers will understand that the bike is to Amsterdam what the car is to America. Both are more than modes of transportation: they’re a substantial part of their riders’ identities.” — Publishers Weekly

Pete Jordan is the author of the memoir Dishwasher: One Man's Quest to Wash Dishes in All Fifty States. Pete's work has been featured on public radio's This American Life and in the New York Times. He lives in Amsterdam.