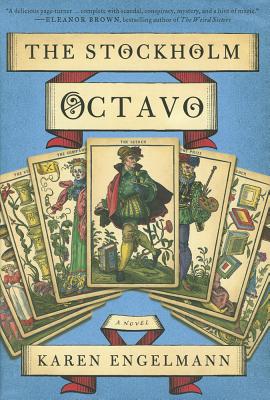 “Emil Larsson, a mid-level bureaucrat in late 18th century Stockholm, is drawn into a web of intrigue and magic when Mrs. Sparrow, the proprietress of his favorite gambling den, insists on reading his cards because he is a 'Seeker' who must find his 'Eight' to ensure a positive outcome in an event of historical importance. Fans of historical fiction will enjoy this sumptuous novel and appreciate the expertly explored Scandinavian setting.”
— Susan Taylor, Book House of Stuyvesant Plaza, Albany, NY
View the List

One man’s fortune holds the key to a nation’s fate in this sensational debut novel set in 18th-century Sweden.

The Stockholm Octavo by Karen Engelmann transports readers to a colorful Scandinavian world of intrigue and magic in a dazzling golden age of high art, music, and opulent fashion.

A masterwork of historical fiction in the vein of Patrick Suskind’s classic novel, Perfume, Karen Engelmann’s The Stockholm Octavo is mysterious and romantic—as magical and enthralling as The Night Circus by Erin Morgenstern—and features a brilliant and unforgettable cast of extraordinary characters.


Praise For The Stockholm Octavo: A Novel…

“Delicious…the essence of witty intelligence. Readers will delight [in] every element in this Swedish weave, from the brutal winter weather to the unfurling of a lady’s fan. The plot is an urgent one, and the characters mysterious, appealing, and memorable….I felt a real kinship with author Karen Engelmann.”
— Sena Jeter Naslund, New York Times bestselling author of Ahab's Wife and Abundance: A Novel of Maire Antoinette

“Fantastic . . . This rollicking adventure story reads at times like a fairy tale, with Good Guys and Bad Guys and obstacles to be recognized and overcome. It’s all quite fun. As either historical novel or adventure story, this clever first novel should appeal to a broad range of readers.
— Library Journal (starred review)

“The Stockholm Octavo, Karen Engelmann’s impressive debut, is as marvelously and intricately constructed as the mysterious form of divination it’s named for. A true pleasure from beginning to satisfying end.”
— Shelf Awareness

“Elegant and multifaceted, Engelmann’s debut explores love and connection in late-18th-century Sweden and delivers an unusual, richly-imagined read...The setup is wonderfully engrossing; this is stylish work by an author of real promise.”
— Kirkus

“Karen Engelmann’s The Stockholm Octavo is a bonbon box filled with treats designed to appeal to lovers of literary historical thrillers.”
— Salon.com

“A dizzying story of political intrigue and forbidden romance, all played out in an array of lost arts, from the reading of cards to the language of ladies’ fans to the healing power of plants. Each has its own delicious vocabulary and in Engelmann’s debut, each word is savored.”
— Boston Globe

“Blends political intrigue, fortune-telling, alchemy, skullduggery, high treason and love. The plot is so compelling it will keep you up at night, and the characters so well-crafted you will gladly follow them through the streets and alleys of 18th-century Stockholm”
— Minneapolis Star Tribune

“Layered, absorbing, and rife with interesting fictional characters and genuine historical detail, Engelmann’s work kept me in suspense from this first page to the last.”
— Real Simple

“The best novels are the ones that keep you up until 4AM ... Karen Engelmann’s The Stockholm Octavo is a true gem that manages to accomplish the above through a compelling storyline, simple yet beautiful prose, and a thought-provoking exploration of the Divine.”
— Plaxpena Blog

“[A] deliciously sly first novel...The Stockholm Octavo is an irresistible cipher between two covers—an atmospheric tale of many rogues and a few innocents gambling on politics and romance in the cold, cruel north.”
— New York Times Book Review

“A full deck of piquant pleasures...elegant and precarious...Engelmann captures the lost enterprises and values of another time, the weird customs that strike us as alien and foolish. . . . [and] craftily unfolds her fictional story pleat by pleat within the real history of 1792.”
— Washington Post

“Karen Engelmann’s absorbing debut doesn’t traffic in mystery so much as Mystery with a capital “m.” . . . . As she deftly shuffles characters, Engelmann’s hand moves faster than a reader’s eye in a thoroughly engaging story of intrigue and gamesmanship.”
— Christian Science Monitor

Karen Engelmann lived and worked in Sweden for eight years. She has an MFA from Goddard College in Vermont. She lives in Dobbs Ferry, New York.