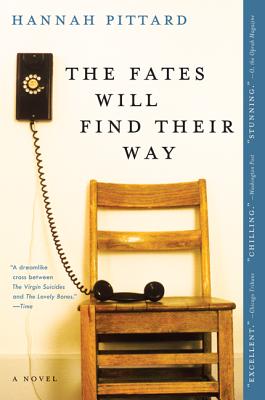 The Fates Will Find Their Way (Paperback)

“When Nora Lindell goes missing one Halloween night, the mystery of what happened to her, and why, becomes the obsession of the boys of the neighborhood. Narrated collectively by those boys, The Fates Will Find Their Way is a haunting examination of what we leave behind when we enter adulthood and all the lost aspects of childhood we want so badly to experience again. A bold and innovative debut from a fine, new literary talent.”
— Dave Mallmann, Next Chapter Bookshop, Mequon, WI
View the List

“A bold, wise, magical, and authentic novel about youthful infatuation and its legacy. Hannah Pittard’s beautifully confident prose is sure to make readers look back on their own teenage years with fresh wonder.”
—Vendela Vida, author of The Lovers

Already acclaimed for her short fiction—a McSweeney’s Amanda Davis Highwire Fiction Award winner whose work was selected by Salman Rushdie for inclusion in 2008 Best American Short Stories’ 100 Distinguished Stories—Hannah Pittard proves herself a master of long form fiction as well with her haunting, masterfully crafted debut novel, The Fates Will Find Their Way. A powerful and beautiful literary masterwork reminiscent of The Virgin Suicides, Pittard’s The Fates Will Find Their Way tells the unforgettable story of a teenaged girl gone missing, and the boys she grew up with who find themselves caught in the mysterious wake of her absence for the rest of their lives.

Hannah Pittard's fiction has appeared in McSweeney's, the Oxford American, the Mississippi Review, BOMB, Nimrod, and StoryQuarterly, and was included in 2008 Best American Short Stories' 100 Distinguished Stories. She is the recipient of the 2006 Amanda Davis Highwire Fiction Award and a graduate of the University of Virginia's MFA program. She divides her time between Charlottesville and Chicago, where she currently teaches fiction at DePaul University.


Praise For The Fates Will Find Their Way: A Novel…

“What emerges from the narration instead of facts are exquisite details that translate instantly into memory.”
— New York Times Book Review

“A wistful novel about how little we know of one another, but how eager we are to tape together a collage of rumors, assumptions and fantasies to answer questions we’re too young, too cowardly or too polite to ask…. Chilling and touching…harrowingly wise about the melancholy process of growing up.”
— Washington Post

“A stunning novel about making up stories as we go along…[a] mesmerizing debut…with every carefully chosen word—and in this short, intense novel, each one counts—Pittard brilliantly draws us into the maturing consciousness of a group of neighborhood boys.”
— O, the Oprah Magazine

“A dreamlike cross between THE VIRGIN SUICIDES and THE LOVELY BONES.”
— Time magazine

“THE FATES WILL FIND THEIR WAY is about a disappearance, but it’s also about the difficulty of growing up, of moving into adulthood and letting go. It’s a brilliant and beautifully written work.”
— The Millions

“Engaging and vigorously told…I heard all sorts of echoes from other books, from Alice Sebold’s THE LOVELY BONES and some of Joyce Carol Oates’ stories and novels…Pittard’s excellent first novel satisfies this demand in spades.”
— Chicago Tribune

“A meditation on the mysteries of life and fate.”
— Elle

“[Pittard] spurs rumination on the moments in which we witness the tragedies of others and somehow manage to wrap events around ourselves.”
— Cleveland Plain Dealer

“This novel uncovers creepy male sexuality in every form and facet by recounting the way a local girl’s disappearance traumatized a group of suburban men and revealing their morbid fantasies about her ultimate fate…THE VIRGIN SUICIDES, but without the virgins.”
— Details

“It’s a tour de force for a young woman to follow the attitudes and changes and expectations of these several men as they grow older. ... I would recommend it to anyone.”
— Christopher Tilghman, author of Mason's Retreat

“An exceptional first novel…of “what ifs” [and] a beautifully crafted portrait of men slipping almost imperceptibly from childhood to middle-age.... It’s hard to imagine a better debut this year.”
— Financial Times

“[The] narrator is a collective “we”... gathering the received anti-wisdom of a group of neighborhood boys in a suburban town. But the way the story plays out, covering conjecture with the sheen of fact and writing myth into stone, Pittard ropes the reader in as well.”
— Time Out Chicago

“Some of you will be familiar with Ms. Pittard’s particular magic.... This is a stunning first novel told in the first person plural with devastating results.”
— McSweeney's

“A bracing debut… Ripe with a sense of danger to the last page, th stories woven among the boys who remembered Nora Lindell create a captivating tale of lives unlived.”
— The Onion AV Club

“THE FATES WILL FIND THEIR WAY is concerned with searching questions rather than the relief of resolution. What might have been a frustrating approach in a lesser novel proves compelling in this one.”
— Boston Globe

“A debut novel sure to linger with readers...Though relatively brief, the novel has great depth, enhanced by Pittard’s precision of language. The result is a stimulating examination of loss, memory, history, and perception and how the past never leaves -- indeed is the main factor in the present.”
— Publishers Weekly, Galley Talk

“Gracefully written by the winner of the 2006 Amanda Davis Highwire Fiction Award, this elegiac portrait of an upscale community offers an interesting take on modern manhood.”
— Kirkus Reviews

“A dark story of adolescence gone awry…In playing out each of the theories about [character] Nora’s disappearance, Pittard perfectly illustrates the hysteria surrounding any such disaster, and the ways in which very detail can be twisted and elevated to create endings to a story that fundamentally has none.”
— BookPage

“The tension builds throughout the book, keeping the reader eager to find out what happened... This debut from McSweeney’s award winner Pittard is smart, eerie, and suspenseful and will appeal to fans of novels combining those elements.”
— Library Journal

“Pittard does an amazing job with setting up middle American suburbia in the latter half of the 20th century.... The story doesn’t shy away from heavy subjects... but it doesn’t use them as emotional gimmicks either.... A very solid debut, worth picking up.”
— Sacramento Book Review

“The architecture of the narrative is cemented in the solipsism of the boys/men…As readers work their way through the novel, they might try guessing what could have happened to Nora, but the ending is a surprise.”
— Bookreporter.com

“THE FATES WILL FIND THEIR WAY is...about the way our imaginations can carry us from a dispiriting selfishness to a nascent empathy, and the way we continue to inflict—or even just observe—pain until that empathy arrives.”
— Jim Shepard

“Pittard gives the secret wink to the reader, because a story is only a story, but at the same time more than a story, and that’s why we love to invent and why we love to listen and to be taken in. At our peril.”
— Ann Beattie, author of WALKS WITH MEN

“THE FATES WILL FIND THEIR WAY is a bold, wise, magical, and authentic novel about youthful infatuation and its legacy. Hannah Pittard’s beautifully confident prose is sure to make readers look back on their own teenage years with fresh wonder.”
— Vendela Vida, author of THE LOVERS

“THE FATES WILL FIND THEIR WAY is simply tremendous—a beautiful, roving, restless and relentless exploration of a crime. It would be almost too sad to bear the implications of this story if it weren’t for the warmth, hope, and kindness of its haunting prose.”
— Patrick Somerville, author of THE CRADLE
or support indie stores by buying on
Copyright © 2020 American Booksellers Association