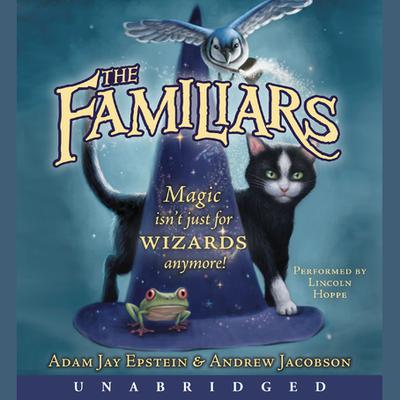 “Aldwyn the clever alley cat, Skylar, the skeptical blue jay, and Gilbert, the insecure tree frog are drawn together when they must save their Loyals from a corrupt Queen. In this spellbinding romp each proves their worth and finds their own magic. Perhaps the Familiars are destined to lead? In their debut novel Adam and Andrew have touches of the animal quest of Incredible Journey combined with the magic of Harry Potter and the animal charm of Charlotte's Web. This reader will be waiting impatiently for the rest of the promised trilogy.-- Shirley Mullin, Kids Ink, Children's Bookstore, Indianapolis, IN”
— Shirley Mullin, Kids Ink, Indianapolis, IN
View the List

For fans of Warriors and The Magic Thief comes a magical adventure story about a street cat who's mistaken for a wizard’s familiar.

When Aldwyn, a young alley cat on the run, ducks into a mysterious pet shop, he doesn’t expect his life to change. But that’s exactly what happens when Jack, a young wizard in training, picks Aldwyn to be his magical familiar.

Finally off the tough streets, Aldwyn thinks he’s got it made. He just has to convince the other familiars—the know-it-all blue jay Skylar and the friendly tree frog Gilbert—that he’s the telekinetic cat he claims to be. But when Jack and two other wizards in training are captured by the evil queen, Aldwyn will have to use all of his street smarts, a few good friends, and a nose for adventure to save the day!

And don’t miss the exciting sequel to this Indie Next List pick, The Familiars: Secrets of the Crown.