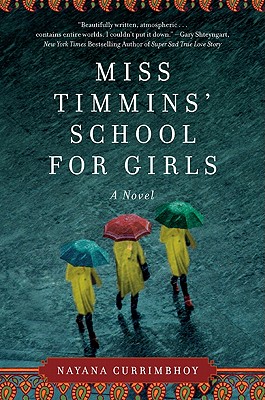 “An irresistible novel that hurls forward at breathtaking speed toward an unpredictable climax.”
—Thrity Umrigar, bestselling author of The Space Between Us

Miss Timmins’ School for Girls is the truly dazzling debut of a major novelist, Nayana Currimbhoy. Set in India during the monsoon of 1974, it tells the story of a conventional young girl who leaves her cloistered small town home to teach at a remote boarding school run by British Missionaries. Part coming-of-age novel, part suspenseful murder mystery, Miss Timmins’ School for Girls is a brilliant evocation of a colorful time and place—India during the love, drug, and rock ’n’ roll era—complete with the sights, sounds, and music of the period seamlessly woven into the page-turning tale.


Praise For Miss Timmins' School for Girls: A Novel…

“The intimate portrait the novel offers of India at this specific point in its history is compelling, as is the dramatic relationship between Charu and the deeply troubled Moira.” — Booklist

“An irresistible novel that hurls forward at breathtaking speed toward an unpredictable climax.” — Thrity Umrigar, bestselling author of The Space Between Us and The Weight of Heaven

“Exotic, mysterious, and haunting, MISS TIMMINS’ SCHOOL FOR GIRLS kept me up late for some delicious, spooky reading nights. I adored this book.” — Katrina Kittle, author of The Kindness of Strangers and The Blessings of the Animals

In Miss Timmins School for Girls, young Charu, fresh from a conventional Brahmin upbringing, is suddenly exposed to Christian British-run boarding school, as well as to the iconoclastic hippie culture of the 1970s. “I watched my worlds collide,” says Charu, “not in fire and brimstone as I had feared, but in comic relief.” Do you think this is true of the book? What are the main cultural conflicts our heroine faces? Are they all resolved through humor?

The British Missionaries are in this remote corner of India to spread Christianity. What else do they spread as evidenced by the daily life in the school?

Charu’s parents have tried to protect their beloved only child from a world they consider cruel. Do you think they did her a disservice by limiting her exposure to the world at large? In what way do you think her cloistered upbringing led Charu to be seduced by Moira Prince?

In spite of her erratic behavior and dark past, do you think Moira Prince is presented as a sympathetic character? How does the author do this?

Charu, has a disfiguring mark on her face. This has made her into an intense, sensitive and secretive person, a watcher. How do you think this influences her actions, and ultimately, the resolution of the murder mystery?

When Charu mourns Prince, she finds herself humming “Ruby Tuesday” by the Rolling Stones. Do you find this incongruous? The soundtrack of the book is rock ‘n’ roll: The Beatles, the Rolling Stones, Cat Stevens, Bob Dylan and Jethro Tull. In your opinion, does this make the foreign landscape and culture more familiar to you? Does it resonate with a coming of age in America in the seventies?

One part of the book is narrated by Nandita, a 15-year-old school girl. How does the author use Nandita’s voice to move the story further? Does Nandita’s vision change your opinion of Charu? If so, how?

Nandita and Charu, the two main narrators of the book, are very different personalities. In the end, who do you think proves to be the stronger, more heroic person, Charu or Nandita?

The principal of Miss Timmins’, Miss Shirley Nelson, puts her reputation in the school above the life of her own daughter. What is it about the relationship between them that makes this believable?

The novel begins and ends on the same day, twelve years after the actual events take place. In the end of the prologue, Merch is planning to do something that night. What do you think he plans to do?

At the very end of the book, when Charu says, “It’s all over now,” what does she mean? In your opinion, what is Merch thinking of, when he asks “What is all over?” Do you think she is still thinking of the murder 12 years ago? Write one paragraph after the last line, to continue the conversation between Merch and Charu that night.