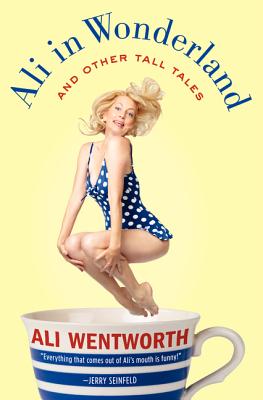 And Other Tall Tales

Mix 1 oz. Chelsea Handler, 1.5 oz. Nora Ephron, finish with a twist of Tina Fey, and you get Ali in Wonderland, the uproarious, revealing, and heartfelt memoir from acclaimed actress and comedian Ali Wentworth. Whether spilling secrets about her quintessentially WASPy upbringing (and her delicious rebellion against it), reminiscing about her Seinfeld “Schmoopie” days and her appearances on The Oprah Winfrey Show, The View, and The Tonight Show with Jay Leno, or baring the details of starting a family alongside husband George Stephanopoulos, one thing is for sure—Ali has the unsurpassable humor and warmth of a born storyteller with a story to tell: the quirky, flavorful, surprising, and sometimes scandalous Ali in Wonderland.

“Ali Wentworth is funny and warm and crazy all at once. Like Barbara Eden. But on something. Like crystal meth.” —Alec Baldwin


Praise For Ali in Wonderland: And Other Tall Tales…

“Everything that comes out of Ali Wentworth’s mouth is funny!”
— Jerry Seinfeld

“Ali Wentworth’s book is like Chicken Soup for the Vagina. Gays and straight men, I’m not leaving you out here! Ali is truly one of the quickest, funniest girls I’ve ever met. Enjoy!”
— Kathy Griffin

“Wentworth is amusing and frank, often frenetic, with sharp intelligence underneath the sassy wackiness; passages about her struggle with depression, falling in love with her husband, and her daughter’s baptism have funny moments, but they’re thoughtful and touching, too…. Highly entertaining memoir.”
— Publishers Weekly

“Ali Wentworth is funny and warm and crazy all at once. Like Barbara Eden. But on something. Like crystal meth.”
— Alec Baldwin

“I would tone down the pee and fart references.”
— Muffie Cabot (Ali's mother)

“Unanimous applause greeted this actress-comedian’s tour of her fabulous life…all recounted in a manner that had one reader wondering if Wentworth is ‘a long-lost sister of the Sedaris clan.’”
— Elle, Readers' Prize February 2012

“One of the most hilarious reads I’ve enjoyed in a long time.”
— Gwyneth Paltrow, goop

“With candor and humor, [Wentworth] writes about her life, her marriage and growing up in the elite world of her illustrious mother…”
— Julie Hinds, Detroit Free Press