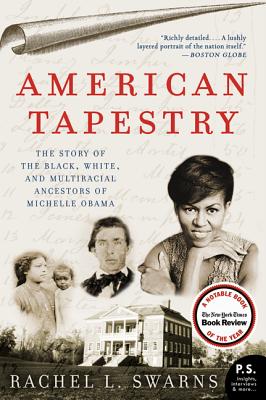 The Story of the Black, White, and Multiracial Ancestors of Michelle Obama

A remarkable history of First Lady Michelle Obama’s mixed ancestry, American Tapestry by Rachel L. Swarns is nothing less than a breathtaking and expansive portrait of America itself.

In this extraordinary feat of genealogical research—in the tradition of The Hemmingses of Monticello and Slaves in the Family—author Swarns, a respected Washington-based reporter for the New York Times, tells the fascinating and hitherto untold story of Ms. Obama’s black, white, and multiracial ancestors; a history that the First Lady herself did not know.

At once epic, provocative, and inspiring, American Tapestry is more than a true family saga; it is an illuminating mirror in which we may all see ourselves.


Praise For American Tapestry: The Story of the Black, White, and Multiracial Ancestors of Michelle Obama…

“Extraordinary. . . . A fascinating account of the First Lady’s family. . . . No political [book] has ever looked like this one.” — New York Times Book Review

“Riveting. . . . A microcosm of this country’s story. . . . The real-life saga of struggle, survival, triumph and tragedy serves as an uplifting companion to Alex Haley’s Roots.” — USA Today

“Richly detailed. . . . A lushly layered portrait of the nation itself. . . .Swarns weaves a narrative in which massive social changes (slavery, Reconstruction, the Great Migration) and the microscopic details of DNA play equally important roles.” — Boston Globe

“Swarns has unearthed and disseminated crucial American history here. . . . A remarkable, only-in-America story that Swarns tells with care and thoughtfulness. . . . Her passion for the story is clear and striking. . . . This book is a worthy and significant endeavor.” — Washington Post

“Swarns paints a vivid, intriguing portrait of people whose struggles, losses, and triumphs speak volumes about the pull of family and the power of American endurance.” — Los Angeles Times

“A completely fascinating look at the complex ancestry of one family, African Americans, and all Americans.” — Booklist (starred review)

“Tremendously moving. . . . Swarns provides numerous tales of heartbreak and achievement, many of which essentially make up the American story.” — Kirkus Reviews

“An engrossing book. . . . Swarns outlines the fascinating journeys taken by various ancestors of First Lady Michelle Obama—the people who, across the generations, helped make her who she is today.” — Library Journal

“Swarns discovers an interesting world that not only helps to define the First Lady’s personal background but is also an essential piece of the fabric that makes up America’s roots. . . . A great glimpse into America’s multicultural foundations.” — Upscale Magazine

“The First Family becomes ever more fascinating—and ever more representative of the nation as a whole—in Rachel Swarns’s terrific investigation into the roots of Michelle Obama. . . . This is a most compelling read and more evidence for our interconnectedness as a people.” — Henry Louis Gates, Jr., Harvard University professor and host and executive producer of PBS's Finding Your Roots

“A grand, important book that shows how American bloodlines are rarely wholly black or purely white, neither one race nor another. Nowhere is that more true than in American Tapestry, an eloquent history of the First Lady’s family.” — James McBride, author of the New York Times bestseller The Color of Water

“Rachel Swarns has not only excavated, with painstaking care, the family tree that is Michelle Obama’s, but, with great insight and beautiful prose, has revealed the complex, eye-opening, and disconcerting experiences that are America. This is a work of impressive historical imagination and deep cultural significance.” — Steven Hahn, Pulitzer Prize-winning author of A Nation under Our Feet

“Illuminating. . . . Unforgettable in its sweep and movingly told, American Tapestry has the power to reshape our understanding of the phrase ‘descended from slaves.’” — Janny Scott, author of A Singular Woman: The Untold Story of Barack Obama's Mother

“In this tour de force of biological sleuthing, Rachel L. Swarns explodes simplistic notions of life and love in the Old South.. . . . Swarns has bestowed upon all Americans a revelatory understanding of our shared racial heritage.” — Fergus M. Bordewich, author of Bound for Canaan

Rachel L. Swarns has been a reporter for the New York Times since 1995, reporting on domestic policy, the presidential campaigns of 2004 and 2008, the First Lady, and the modern American family. She has also worked for the New York Times in Russia, Cuba, and South Africa, where she served as the Johannesburg bureau chief. She lives in Washington, D.C.