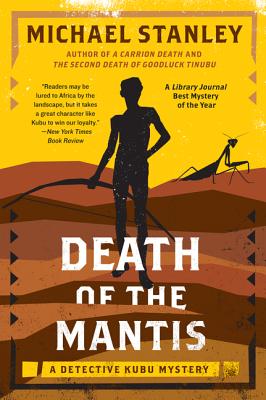 Death of the Mantis

“The best book yet in one of the best series going: a serious novel with a mystery at its core that takes us places we’ve never been.”
—Timothy Hallinan, author of The Queen of Patpong

Mystery readers who have not yet made the acquaintance of larger than life African investigator Detective David “Kubu” Bengu are doing themselves a great disservice. Death of the Mantis is the third Kubu novel from author Michael Stanley—following the critically acclaimed A Carrion Death and The Second Death of Goodluck Tinubu—and it plunges the robust manhunter into the chaotic center of a murder case involving nomadic Bushmen that is stoking the fires of prejudice and tribal hatred. Set in Botswana—the fascinating equatorial country also explored by Alexander McCall Smith in his #1 Ladies’ Detective Agency novels—Death of the Mantis is a book alive with the sights and sounds of an exotic and breathtaking land. The exploits of Stanley’s singularly captivating policeman protagonist will delight you and keep you guessing.

“DEATH OF THE MANTIS is the best book I’ve read in a very long time. A fantastic read. Brilliant!”
— Louise Penny, New York Times bestselling author of Bury Your Dead

“DEATH OF THE MANTIS is the best book yet in one of the best series going: a serious novel with a mystery at its core that takes us places we’ve never been, thrills and informs us, and leaves us changed by the experience. I loved this book.”
— Timothy Hallinan, author of The Queen of Patpong and A Nail Through the Heart

“Assistant Superintendent Kubu is back! A page-turner from start to finish. Michael Stanley’s enthralling series is a must-read for anyone who enjoys clever plotting, terrific writing, and a fascinating glimpse of today’s Africa. Kubu—DEATH OF THE MANTIS—Michael Stanley: the perfect mystery trifecta for any crime fan.”
— Charles Todd, New York times bestselling author of A Matter of Justice

“Impossible to put down, this immensely readable third entry. . . delivers the goods. Kubu’s painstaking detecting skills make him a sort of Hercule Poirot of the desert. . . . This series can be recommended to a wide gamut of readers.”
— Library Journal (starred review)