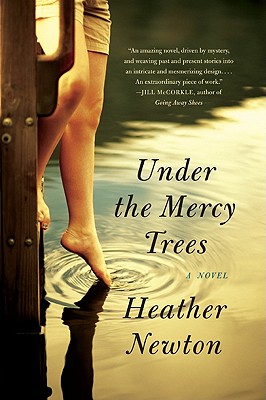 Under the Mercy Trees

“[An] eloquent, sorrowful novel....Readers of both Pat Conroy, on one hand, and Carson McCullers, on the other, will relish Newton’s flawed characters and piquant portrayal of small town life.” —Booklist (starred review)

“Under the Mercy Trees will take your breath away.” —Robin Antalek, author of The Summer We Fell Apart

Heather Newton’s Under the Mercy Trees tells the poignant and unforgettable story of a man forced to face his troubled past when he returns to his hometown in the mountains of North Carolina following the disappearance of his brother.

Thirty years ago, Martin Owenby came to New York City with dreams of becoming a writer. Now his existence revolves around cheap Scotch and weekend flings with equally damaged men. When he learns that his older brother, Leon, has gone missing, he must return to the Owenby farm in Solace Fork, North Carolina, to assist in the search. But that means facing a past filled with regrets, the family that never understood him, the girl whose heart he broke, and the best friend who has faithfully kept the home fires burning. As the mystery surrounding Leon's disappearance deepens, so too does the weight of decades-long unresolved differences and unspoken feelings—forcing Martin to deal with the hardest lessons about home, duty, and love.


Praise For Under the Mercy Trees: A Novel…

“A melancholy mood suffuses Newton’s nimble debut.... [An] eloquent, sorrowful novel.... Readers of both Pat Conroy, on one hand, and Carson McCullers, on the other, will relish Newton’s flawed characters and piquant portrayal of small town life.” — Booklist (starred review)

“Told from these four characters’ points of view, this first novel builds nicely toward many revelations and resolutions. Newton is skilled at revealing a world of hurt, and fans of family dramas will appreciate it.” — Library Journal

“A novel that seamlessly, beautifully, twines past with present to show how we can never escape our histories or the deeds—good and bad—that create those histories. The powerful, swelling conclusion of this book raised gooseflesh on my arms and had me near tears. ” — Tom Franklin, New York Times bestselling author of Crooked Letter, Crooked Letter

“Under The Mercy Trees will take your breath away.... A remarkable debut by a writer who captures with her words the beauty in the ugly and forgiveness in the unrepentant.” — Robin Antalek, author of The Summer We Fell Apart

“Under the Mercy Trees is an amazing novel, driven by mystery, and weaving past and present stories into an intricate and mesmerizing design.... An extraordinary piece of work.” — Jill McCorkle, author of Going Away Shoes

“A brilliantly crafted novel of a complex family bound by love and hate, hope and regret, a family that must come to terms with each other and in the process, forgive themselves. You’ll find a bit of your own family there and perhaps something of yourself.” — Sandra Dallas, author of Whiter Than Snow and Prayers for Sale

“Under the Mercy Trees offers eloquent evidence that nothing is or ever will be as dramatic as family.... [A] stunningly beautiful book…. Newton has rendered her characters’ world with clear-eyed compassion and in so doing delivered one sweet ache of a novel.” — Tommy Hays, author of The Pleasure Was Mine

“Newton delivers a stirring debut novel told from the perspective of four central characters embroiled in a family drama that spans generations and is riddled with defensive secrecy and emotional penury in equal measures…. Newton delivers across the board with these characters.” — Publishers Weekly

Heather Newton's short stories have appeared in Crucible, Encore, Wellspring, and elsewhere She lives with her family in Asheville, North Carolina, where she is an attorney and mediator.

1. Of the four narrators–Martin, Liza, Bertie and Ivy–who was your favorite? Why?

2. The scene in which Martin remembers his childhood Baptism ends with: “In particularly drunk moments since then, he had wished he could do it again. He could use a wash now, a good soak or scrub, to remove all the sins he’d accumulated. But God only lets you go under one time.” What does this say about how Martin feels about himself? By the end of the novel, how have the other characters helped Martin come to terms with his feelings of failure and regret?

3. As the story unfolds, we learn of Leon’s past wrongs–beating Martin as a child, blackmailing Mr. Samuels, “selling” Ivy for a half pack of cigarettes. Before (and after) he disappears, what attempts does Leon make to set these past wrongs right? Do you feel he succeeds in making amends? What do you think Leon would say for himself if he could speak?

4. Bertie describes her sense of loss at moving from youth to middle age as, “It happened so fast. One day, one minute, even, she was getting the up-and-down from the boys at Riddle’s general store. The next, nobody was looking at her anymore.” What do you think it takes to live happily in middle age–something Bertie has not been able to do?

5. Ivy sees ghosts. Do you think this is a suggestion that ghosts are real or simply a literary device? Why do you think Newton chose to have Ivy see ghosts? What do the scenes with the ghosts add to the novel?

6. Under the Mercy Trees is tangled with secrets. What do you think of the characters’ choices about whether to tell–or not tell–their secrets?

7. Liza’s husband Raby says to Martin, “Boy, you know how it is with certain people in your life. People you knew when you were young, when the cracks to your heart were still open.” Does this statement ring true for you? Are their people from your childhood–friends or old loves–who remain important to you?

8. Newton uses scenes from the past to show the young Martin’s emerging awareness of his homosexuality. How does Martin’s sexual orientation increase his sense of alienation from his family and from his rural roots in general? Do you think that Martin would still have felt like a misfit in his family and place of origin even if he were not gay? In what other ways can someone feel like an outsider in a family?

9. Hodge never seems to judge Martin, even though Martin repeatedly disappoints him. Does Martin deserve such forgiveness? Why or why not?

10. Newton has said that what she likes most to write about is human regret. What burdens are Martin, Liza, Bertie and Ivy able to lay down by the end of the novel?

11. Flannery O’Connor once said, “I think it is safe to say that while the South is hardly Christ-centered, it is most certainly Christ-haunted.” What role does Christian belief play in Under The Mercy Trees? How do the different religious expressions of Hodge and Eugenia highlight the novel’s themes of forgiveness and redemption?

12. Certain objects in the novel are important to the characters–Liza’s Ford Sunliner convertible, Leon’s knuckle knife, the ledger that belonged to Martin’s mother, the photograph of Martin and Liza at their high school graduation. Why are these items significant? Do you own a particular object that has emotional significance for you? Why is it special?

13. Two locations significant to the novel are Ivy’s “special place” and the grove of storm-bent trees. What role do these places play in the novel? Why do you think Newton chose the title Under The Mercy Trees?