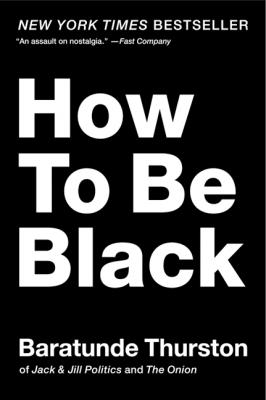 How to Be Black

The Onion’s Baratunde Thurston shares his 30-plus years of expertise in being black, with helpful essays like “How to Be the Black Friend,” “How to Speak for All Black People,” “How To Celebrate Black History Month,” and more, in this satirical guide to race issues—written for black people and those who love them. Audacious, cunning, and razor-sharp, How to Be Black exposes the mass-media’s insidiously racist, monochromatic portrayal of black culture’s richness and variety. Fans of Stuff White People Like, This Week in Blackness, and Ending Racism in About an Hour will be captivated, uplifted, incensed, and inspired by this hilarious and powerful attack on America’s blacklisting of black culture: Baratunde Thurston’s How to Be Black.

Praise For How to Be Black…

“Part autobiography, part stand-up routine, part contemporary political analysis, and astute all over.... Reading this book made me both laugh and weep with poignant recognition.... A hysterical, irreverent exploration of one of America’s most painful and enduring issues.”
— Melissa Harris-Perry

“A hilarious blend of razor-sharp satire and memoir. . . . Using his own story and humor, Thurston demonstrates that the best way to ‘be’ anything is to simply be yourself.”
— Publishers Weekly

“Terrific...How to Be Black is an assault on nostalgia--a satirical, biographic attack on the idea that ‘blackness’ or any label should be derived from historical description.”
— Fast Company

"Struggling to figure out how to be black in the 21st century? Baratunde Thurston has the perfect guide for you...Fans of Stuff White People Like, This Week in Blackness and other blogs that take satirical shots at racial stereotypes are sure to love How to Be Black."
— The Root

“A hilarious look at the complexities of contemporary racial politics and personal identity.”
— Booklist

“One of the smartest and funniest books I’ve ever read.”
— Christian Lander (via Twitter)

Baratunde Thurston is the director of digital at The Onion, the cofounder of Jack & Jill Politics, a stand-up comedian, and a globe-trotting speaker. He was named one of the 100 most influential African-Americans of 2011 by The Root and one of the 100 most creative people in business by Fast Company magazine. Baratunde resides in Brooklyn and lives on Twitter (@baratunde).