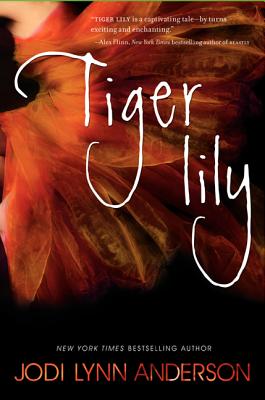 “As a big fan of the original Peter Pan, I was initially a little wary of Anderson's retelling, but after only a few sentences I was completely sold! Before Wendy Bird, there was Tiger Lily, a mysterious and wild young woman from one of Neverland's many tribes. She and the infamous Peter share a love story that is beautiful, tenuous, and doomed from the onset. Anderson brings Neverland back to life in a gritty and very real way, and I loved being immersed in that world.”
— Amanda Hurley, Inkwood Books, Tampa, FL
View the List

When fifteen-year-old Tiger Lily meets the alluring teenage Peter Pan deep in the forbidden woods of Neverland, the two form an unbreakable bond. As the leader of the Lost Boys, the most fearsome of Neverland's inhabitants, Peter is an unthinkable match for Tiger Lily. And yet, she is willing to risk everything—her family, her future—to be with him.

Then an English girl named Wendy Darling arrives on the island. With dangers tightening around them, Tiger Lily soon finds out how far she is willing to go to keep Peter with her in Neverland…and discovers that the deadliest enemies lurk inside even the most loyal and loving heart.

★ “The mythology of Neverland is eloquently woven into the story, and characters are reborn in fascinating ways. Readers will find it being drawn into Tiger Lily’s world, where dangers and emotions are painted several shades darker than in J. M. Barrie’s classic fantasy.” — Publishers Weekly (starred review)

★ “Its many layers create a place of dangerous wonder. Tiger Lily has been reinvented with a complex backstory, giving her a credible source of deep strength and dark emotion.” — School Library Journal (starred review)

★ “Serious and moving.” — Bulletin of the Center for Children’s Books (starred review)

“This unique retelling of PETER PAN by J. M. Barrie has a literary feel, lush descriptions, and a mysterious but sympathetic main character…A sophisticated fantasy, a new spin on a classic tale.” — Voice of Youth Advocates (VOYA)

“In expressive, graceful language, Anderson tells the story of the fierce Tiger Lily and her thorny romance with the legendary Peter Pan. Its sensitive, passionate portrayal of familiar characters is captivating.” — Booklist

“With this quiet and bittersweet story, readers will never again think of Peter Pan as simple animation.” — BookPage