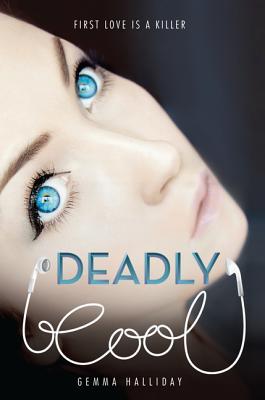 First I find out that my boyfriend is cheating on me. Then he’s pegged as the #1 suspect in a murder. And now he’s depending on me to clear his name. Seriously?

As much as I wouldn’t mind watching him squirm, I know that he’s innocent. So I’m brushing off my previously untapped detective skills and getting down to business. But I keep tripping over dead bodies and I’m still no closer to figuring out who did it. And what’s worse: all signs seem to point to me as the killer’s next victim.

I really need to pick a better boyfriend next time.

“Halliday has her finger on the pulse of high-schoolers, whether goth, jock, prude, or computer nerd. With red herrings aplenty and a wicked pace, this relentlessly pulls the reader along to an explosive conclusion.”
— Booklist

“This fun and outrageous mystery is a perfect mix of humor and horror that will have readers laughing while they try to figure out ‘whodunit.’ ”
— School Library Journal

“Halliday effectively combines a murder mystery with daily high school drama. Sharp humor is layered throughout the novel (fans of Veronica Mars will likely appreciate this one).”
— Voice of Youth Advocates (VOYA)

“Gemma Halliday delivers a fun, sassy read that has you turning pages so fast, you’ll be breathless.”
— C.C. Hunter, author of Born at Midnight

When Gemma Halliday was sixteen she wanted to be either a rock star or Marilyn Monroe. Instead, she ended up working as a film extra, a teddy bear importer, a department store administrator, a preschool teacher, a temporary-tattoo artist, and a 900-number psychic before settling on the career of author. Since then, her books have been published in several countries, optioned for television, and have won lots of cool, shiny trophies, including a National Readers' Choice Award and three RITA nominations. Gemma now lives in the San Francisco Bay area, where she loves watching reality TV shows, eating takeout pizza, and shoe shopping. She is also the author of Deadly Cool.