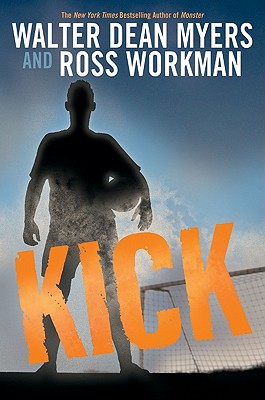 For the very first time in his decades-long career writing for teens, acclaimed and beloved author Walter Dean Myers writes with a teen, Ross Workman.

Kevin Johnson is thirteen years old. And heading for juvie. He's a good kid, a great friend, and a star striker for his Highland, New Jersey, soccer team. His team is competing for the State Cup, and he wants to prove he has more than just star-player potential. Kevin's never been in any serious trouble . . . until the night he ends up in jail. Enter Sergeant Brown, a cop assigned to be Kevin's mentor. If Kevin and Brown can learn to trust each other, they might be able to turn things around before it's too late.

“Drugs, drive-by shootings, gang warfare, wasted lives—Myers has written about all these subjects with nuanced understanding and a hard-won, qualified sense of hope.”
— New York Times

Praise for Lockdown: “A moving tale of a kid who may have made a mistake but who still deserves the modest future he seeks. Refreshingly avoids cliché.”
— Bulletin of the Center for Children’s Books (starred review)

Praise for Lockdown: “Myers creates a nuanced, realistic portrait of a teen dealing with incarceration and violence. Myers gets his voice just right.”
— Voice of Youth Advocates (VOYA)

Praise for Dope Sick, named a 2010 ALA Top Ten Quick Pick for Reluctant Young Adult Readers: “Using both harsh realism and a dose of the fantastic, Myers will leave readers with plenty to think about.”
— Publishers Weekly (starred review)

When Ross Workman was thirteen, he wrote a fan email to his favorite author. When Walter Dean Myers wrote back and asked him whether he would be interested in writing a book, Ross was amazed—and incredibly excited. Four years later, Ross is seventeen and in eleventh grade. In addition to writing, Ross plays a sport every season: high school soccer in the fall, high school wrestling in the winter, and club travel soccer in the spring. He lives in New Jersey.