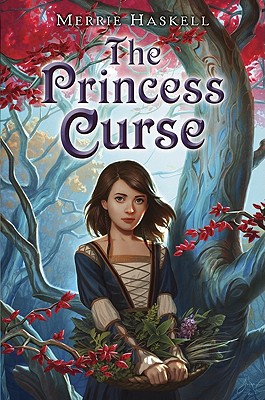 Merrie Haskell’s middle-grade fantasy novel Princess Curse is an imaginative retelling of the fairy tales The Twelve Dancing Princesses and Beauty and the Beast.

In the fifteenth-century kingdom of Sylvania, the prince offers a fabulous reward to anyone who cures the curse that forces the princesses to spend each night dancing to the point of exhaustion. Everyone who tries disappears or falls into an enchanted sleep.

Thirteen-year-old Reveka, a smart, courageous herbalist’s apprentice, decides to attempt to break the curse despite the danger. Unravelling the mystery behind the curse leads Reveka to the Underworld, and to save the princesses, Reveka will have to risk her soul.

Merrie Haskell was born in Michigan and grew up in North Carolina. She wrote her first story at the age of seven, and she walked dogs after school in order to buy her first typewriter.

Merrie returned north to attend the Residential College of the University of Michigan, where she earned a BA in biological anthropology. Her fiction has appeared in Nature, Asimov's Science Fiction, Strange Horizons, and Unplugged: The Web's Best Sci-Fi and Fantasy: 2008 Download. She now lives in Saline, Michigan, with her husband and stepdaughter. Merrie works in a library with over seven million books, and she finds this to be just about the right number. She is also the author of The Princess Curse and Handbook for Dragon Slayers.


Praise For The Princess Curse…

With a good sense of humor, an able and empowered protagonist, and a highly original take on this tale, Haskell’s story gives readers much to enjoy.
— Publishers Weekly

[An] intriguing mix of fairy tale, Romanian folklore, and classic mythology…readers will likely be as anxious to return to the Underworld as Reveka.
— Bulletin of the Center for Children’s Books
or
Not Currently Available for Direct Purchase
Copyright © 2020 American Booksellers Association