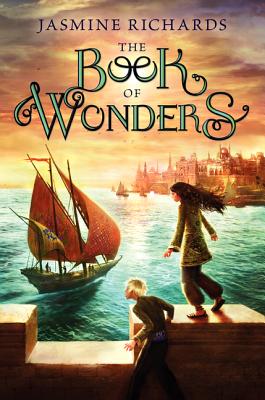 The Book of Wonders

Thirteen-year-old Zardi loves to hear stories about fantastical beings long banned from the kingdom of Arribitha. But anyone who is caught whispering of their powers will feel the rage of the sultan—a terrifying tyrant who, even with his eyes closed, can see all.

When her own beloved sister is captured by the evil ruler, Zardi knows that she must risk everything to rescue her. Along with Rhidan, who is her best friend, and an unlikely crew of sailors led by the infamous Captain Sinbad, Zardi ventures forth into strange and wondrous territory with a seemingly impossible mission: to bring magic back to Arribitha and defeat the sultan once and for all.


Praise For The Book of Wonders…

“From the start, I so wanted to know what happened next. The atmosphere and magic really pulled me in.”
— Angie Sage, author of the internationally best-selling series, Septimus Heap

“Readers will want to spend a thousand and one nights in the exotic world of The Book of Wonders. It’s a dazzling tale!”
— Diane Zahler, author of The Thirteenth Princess

In her skillful debut novel, Richards, an editor of children’s books in the U.K., keeps the novelties coming.
— Publishers Weekly

this buoyant debut offers a fresh plot, brisk pacing and engaging characters. A sprightly, accessible series opener recommended for those ready for a change of venue from standard-issue, middle-grade fantasy.
— Kirkus Reviews

Jasmine Richards was born in London, grew up in a library, and was the first in her family to go to university. After graduating from Oxford she had a brief stint at New Scotland Yard, then chose a career in publishing over being the next Sherlock Holmes. Today Jasmine is a senior editor at a leading British publishing house and lives in the Cotswolds (rather near the Tangley Woods) with her husband and two children. She is the author of Keeper of Myths, Secrets of Valhalla, and The Book of Wonders, of which School Library Journal said, “Swiftly paced writing, appealing characters, and action packed; will appeal to fans of Rick Riordan’s Percy Jackson books.” You can visit Jasmine online at www.jasminerichards.com.