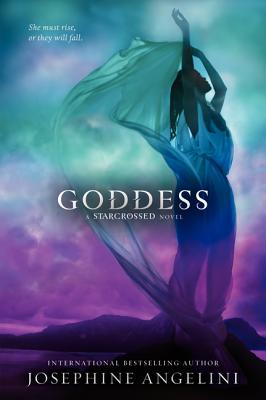 After Helen Hamilton accidentally unleashes the violent gods from their captivity on Olympus, she and her friends must imprison them before their thirst for war—and blood—take over the world. But the gods' fury already has a body count, and time is running out. With Lucas Delos's life hanging in the balance, and their once-solid group of friends now divided, Helen must face this battle alone, while also deciding who has her heart—Lucas, or the possible Tyrant, Orion.

With a masterfully-woven plot and epically-high stakes, the compelling twists and turns in Goddess will leave readers completely spellbound.

praise for STARCROSSED: “One of the most cinematic books I’ve ever read. Dramatic and intense! I can’t tell you how many times I gasped while reading this book. Starcrossed plays out like a movie in your head.”
— Sophie Jordan, New York Times bestselling author of FIRELIGHT

praise for DREAMLESS: This fantastical dual-world page-turner introduces more abhorrent mythological creatures while reuniting readers with Helen’s supportive high-school friends, as well as the crazy Delos family, who anchor her between the real and mythological worlds.
— Booklist

praise for DREAMLESS: “A thrilling tale about love, friendship, family, and determination you won’t be able to resist!”
— KidsBookShelf.com

Josephine Angelini is a Massachusetts native and a graduate of New York University's Tisch School of the Arts with a major in theater and a focus on the classics. She lives in Los Angeles with her husband and three shelter cats.