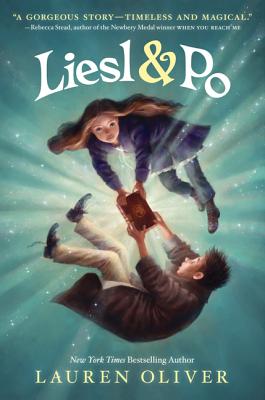 From New York Times bestselling author Lauren Oliver comes a luminous novel that glows with rare magic, ghostly wonders, and a true friendship that lights even the darkest of places. An E. B. White Read-Aloud Honor Book, it’s perfect for fans of the author’s other middle grade novels: The Spindlers and the Curiosity House series.

Liesl lives in a tiny attic bedroom, locked away by her cruel stepmother. Her only friends are the shadows and the mice—until one night a ghost named Po appears from the darkness.

That same evening, an alchemist's apprentice named Will makes an innocent mistake that has tremendous consequences for Liesl and Po, and it draws the three of them together on an extraordinary journey.

“A wonderfully imaginative, startlingly moving and at times wickedly funny fantasy. With nods to Dahl, Dickens, the Grimms and even Burnett, the author has made something truly original. Acedera’s frequent black-and-white illustrations are a perfect complement. An irresistible read: This book sings.” — Kirkus Reviews (starred review)

“Classic fairy tale elements weave throughout this spirited, old-fashioned adventure. Invigorating and hopeful, this novel testifies to the power of friendship and generosity to conquer greed and depression.” — Publishers Weekly (starred review)

“With her third book, Lauren Oliver (Before I Fall; Delirium) creates another highly original world, this one for middle-grade readers. Oliver introduces orphans Liesl and Will, a touch of magic, some delectable coincidences, and friendship that stretches from the Living Side to the Other Side.” — Shelf Awareness

“A gorgeous story--timeless and magical.” — Rebecca Stead, Newbery Medal-winning author of When You Reach Me

“Liesl & Po by Lauren Oliver brings much-needed magic to an increasingly neglected age group. It’s books like this, with its classic quest plot, intertwined with lyrical metaphysics, that can set a child up for life.” — The Sunday Telegraph

“An absolute delight...Although aimed at younger readers, the lightness of touch and the tenderness of the message could make grown men weep.” — Daily Mail (London)