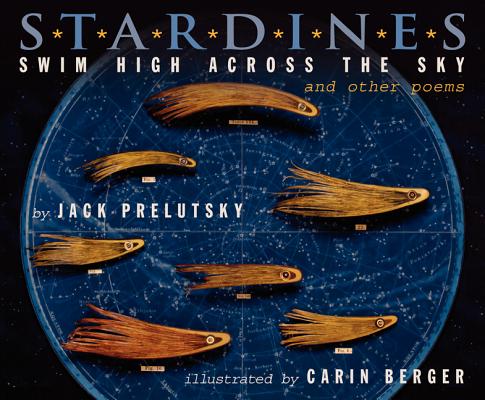 Stardines Swim High Across the Sky

Beloved and bestselling poet Jack Prelutsky and New York Times Best Illustrated artist Carin Berger team up to create a new collection of silly, strange, and sensational animal poems! Told through couplets and visually arresting shadow boxes, dioramas, and cut-paper collage, Stardines Swim High Across the Sky evokes both natural history museums and wild and silly fantasy. "The zoology may be suspect, but the laughs are guaranteed."—Publishers Weekly

Sixteen extraordinary imagined creatures inhabit the pages of this unique, inspired, humorous picture book ideal for sharing together, and for reading again and again. Jack Prelutsky reinvents many familiar and beloved animals by combining inanimate objects with them (so, for example, a pair of pants and an anteater become a panteater). Carin Berger's illustrations are showstoppers. Her shadow boxes and dioramas utilize vintage type, ephemera, and such elements as ribbon, cards, buttons, and wood and bring the animals to life. Read it aloud, read it together: this is a catalog of effervescent silliness and will undoubtedly inspire young poets and artists alike. "The total effect is both whimsical and fascinating, with rich language in the poems and unexpected objects in the pictures to return to over and over again.'—The Horn Book


Praise For Stardines Swim High Across the Sky: and Other Poems…

“Spectacular [and] witty. . . . Has the feel of a vintage science project by the weirdest (and most imaginative) kid in class. The zoology may be suspect, but the laughs are guaranteed.” — Publishers Weekly (starred review)

Praise for Behold the Bold Umbrellaphant and Other Poems: “This is definitely a ‘do not miss’ poetry pick.” — School Library Journal (starred review)

Carin Berger is an award-winning designer and illustrator. Her cut-paper collages are made using ephemera, such as catalogues, old books, receipts, letters, and ticket stubs. In a starred review, Kirkus said of her Forever Friends, “Sophisticated, sensitive, and accessible, this picture book will offer new insights and pleasures with each season.” The Little Yellow Leaf was a 2008 New York Times Best Illustrated Children’s Books selection, and in starred reviews, Publishers Weekly called her A Perfect Day “lovely” and her Finding Spring “exceptional.” She is also the illustrator of the acclaimed Stardines Swim High Across the Sky and Behold the Bold Umbrellaphant, both by Jack Prelutsky, among other books. She lives with her family in New York City. www.carinberger.com