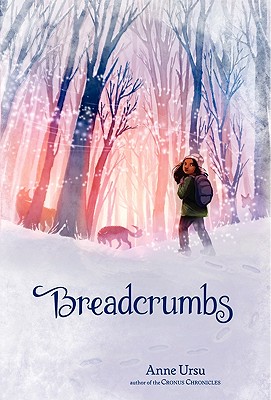 “Devastatingly brilliant and beautiful...Ursu has sculpted a rich and poignant adventure that brings readers deep into the mysterious, magical, and sometimes frightening forests of childhood and change. Breadcrumbs is one of those rare novels that turned me on my head then sat on my heart and refused to budge.” — Ingrid Law, Newbery Honor-winning author of Savvy

“This is a lyrical book, a lovely book, and a smart book; it dares us to see stories as spreading more widely, and running more deeply, than we had imagined.” — Gary Schmidt, Newbery Honor-winning author of The Wednesday Wars

Like a fairy-tale heroine, Hazel traverses the woods without a breadcrumb trail to save a boy who may not want to be saved in this multi-layered, artfully crafted, transforming testament to the power of friendship. — Kirkus Reviews (starred review)

“Wonderfully distinct, delightfully told and destined for a long life on the shelf.” — The Wall Street Journal

Anne Ursu is the author of the acclaimed novels The Lost Girl, Breadcrumbs, and The Real Boy, which was longlisted for the National Book Award. The recipient of a McKnight Fellowship Award in Children’s Literature, Anne is also a member of the faculty at Hamline University’s MFA in Writing for Children and Young Adults. She lives in Minneapolis with her family and an ever-growing number of cats.