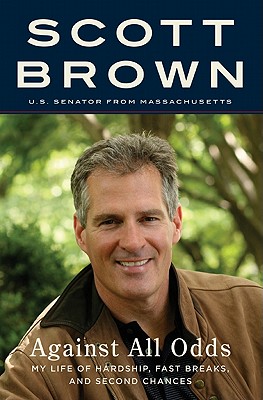 My Life of Hardship, Fast Breaks, and Second Chances

Against All Odds is the extraordinary personal story of the man who rose up to meet the challenge of terrific opposition and become one of America's most promising new political figures—Senator Scott Brown. Brown is famous for succeeding popular Massachusetts Senator Ted Kennedy after Kennedy’s death in 2010—but, as he reveals in a compelling memoir reminiscent of Sarah Palin’s Going Rogue and Clarence Thomas’s My Grandfather’s Son, his experiences with struggle and achievement go back a lifetime.


Praise For Against All Odds: My Life of Hardship, Fast Breaks, and Second Chances…

“Powerful stuff. . . .This isn’t your typical memoir. It is brutally honest, difficult to read, and important.”
— The Tucson Citizen

“A fresh, compelling memoir of a childhood that could have led to a miserable life, but didn’t. . . .Brown’s straightforward narrative makes for a good read.”
— Louisville Courier Journal

“Dramatic. . . . Poignant. . . . Scott Brown’s life could have veered horribly wrong so many times, as he amply demonstrates in his disquieting memoir. . . . A reader will get an everything’s-finally-right-with-the-world thrill from his success in life.
— The Washington Post

U.S. Senator Scott Brown was elected by the people of Massachusetts on January 19, 2010, to fill the term of the late senator Ted Kennedy. He lives in Wrentham, Massachusetts, with his wife, Gail, and they have two daughters, Ayla and Arianna.