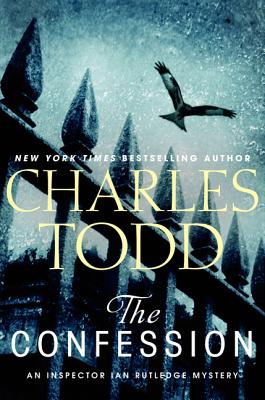 “One of the best historical series being written today.”
—Washington Post

“Todd once and for all establishes the shell-shocked Rutledge as the genre’s most complex and fascinating detective.”
—Entertainment Weekly

The Confession is historical crime fiction at its finest, continuing Charles Todd’s New York Times bestselling mystery series featuring severely damaged British World War I veteran, and yet still astonishingly efficient Scotland Yard inspector, Ian Rutledge. Todd’s troubled investigator wrestles with a startling and dangerous case that reaches far into the past when a false confession from a man who is not who he claims to be leads to a brutal murder. The Confession is a must-read for every fan of Elizabeth George, Martha Grimes, P.D. James, Ruth Rendell, and Jacqueline Winspear, as post-war London’s best detective finds himself ensnared in a dark and deadly investigation that unearths shocking small town secrets dating back more than a century.

“There’s both a pattern and a purpose to the superb historical mysteries produced by mother-and-son writing partners known as Charles Todd.”
— New York Times Book Review on The Confession

“Todd serves up plenty of period detail and plot twists, but the real attraction here is Rutledge, a shrewd, dedicated detective grappling with the demons of his past.”
— Booklist on The Confession

“As with any good mystery, the tension ramps up as the story progresses, pulling more and more characters into the fray, weaving three murders flawlessly into a tight tale. Mr. Todd’s characterization is his strength.”
— New York Journal of Books on The Confession

“Another excellent Inspector Ian Rutledge mystery....You follow a twisting road when you read this book. You won’t soon forget your trip to Furnham and the people who may not be who they seem to be.”
— Suspense Magazine on The Confession

“Todd once and for all establishes the shell-shocked Rutledge as the genre’s most complex and fascinating detective.”
— Entertainment Weekly, on A LONELY DEATH (Grade: A-)

“Another engaging entry in a fine series.”
— Booklist on A Lonely Death

“A strong entry in a strong series.”
— Charlotte Observer on A Lonely Death

“[The authors’] subtle prose and profound empathy for all their characters enhance a suspenseful and twisty plot.”
— Publishers Weekly on A Lonely Death

“Todd’s intriguing revenge tale will keep the reader turning the pages, but the main draw remains Rutledge, the relentless inspector haunted by the voice of a Scotsman he executed on the battlefield for disobeying an order. Highly recommended for all aficionados of British postwar historical mysteries.”
— Library Journal on A Lonely Death
or
Not Currently Available for Direct Purchase
Copyright © 2020 American Booksellers Association