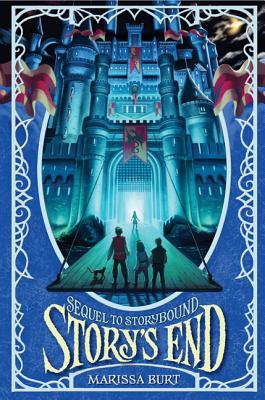 Enter the magical land of Story in this sequel to Storybound, perfect for fans of Inkheart, The School for Good and Evil, and classic fantasy tales like Ella Enchanted and The NeverEnding Story.

Kids who love fairy tales, dragons, and magic will be enchanted by Una Fairchild's unforgettable adventure in Story's End.

Story is a land of dashing Heroes, dastardly Villains, and epic quests—and once upon a time, a noble King. But the King vanished so long ago that even the memory of him is lost. Now a cruel Enemy plots to rewrite Story's future, and an ordinary girl named Una Fairchild may be the only one who can stop him.

As Una and her friends Peter and Indy race to defeat the Enemy, their quest will take them deep into the secrets of Story's past . . . and Una's own mysterious ties to this fairy-tale kingdom and its long-forgotten King.

Discover the richly imagined world, spirited cast of storybook characters, and timeless appeal of Story's End, which closes the book on Una's adventure "with an all-out bang" (ALA Booklist).

“Hits the ground running. There are a lot of compelling plotlines, and the book ends with an all-out bang.”
— Booklist

Marissa Burt was forever getting notes sent home from teachers about reading novels during class. She grew up in Oregon and now lives in the Seattle area with her husband and three sons. Marissa is also the author of Storybound and Story's End.