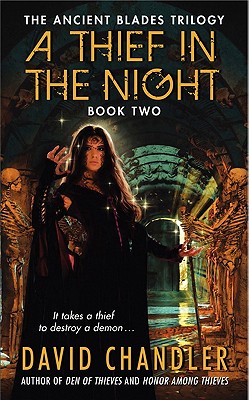 A Thief in the Night

Den of Thieves introduced a phenomenal new fantasist to the world: David Chandler. With A Thief in the Night, he continues the saga of young cutpurse Malden, whose one tragic mistake has marked him for either doom or glory if his luck holds out. Fantasy lovers who regularly devour the works of Brent Weeks, Scott Lynch, and Joe Ambercrombie—and fans of the action-packed epic fantasy of George R. R. Martin (Game of Thrones) and R. A. Salvatore—will be entranced by this gritty and exciting tale of intrigue and betrayal, of knights, thieves, witches, and monsters, as Malden pursues a fabulous treasure, and very possibly his own damnation, in the lair of a terrible demon.

David Chandler was born in Pittsburgh, Pennsylvania, in 1971. He attended Penn State and received an MFA in creative writing. In his alter-ego as David Wellington, he writes critically acclaimed and popular horror novels and was one of the co-authors of the New York Times bestseller Marvel Zombies Return. Den of Thieves is his first fantasy novel, soon followed by A Thief in the Night and Honor Among Thieves.