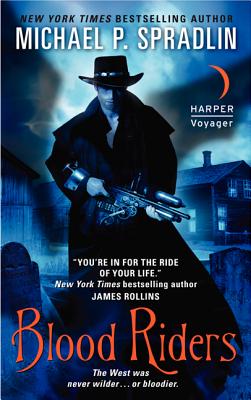 “The history of the Old West written in blood and laced with dark humor, all set against a backdrop of ancient evil and a struggle for survival….You’re in for the ride of your life.”
—James Rollins, New York Times bestselling author of The Devil Colony

Already a New York Times bestselling author for his satiric, gore-soaked “songbooks” (It’s Beginning to Look a Lot like Zombies; Every Zombie Eats Somebody Sometime), author Michael P. Spradlin now dons a different hat and gallops hell for leather into a darker, wilder West. Blood Riders is the story of Civil War veteran Jonas R. Hollister, who’s recruited by the U.S. government to hunt down and destroy an ancient tribe of vampires that is terrorizing the frontier territories. An ingenious mash-up of western and dark fantasy—with an intriguing touch of American steampunk weaponry thrown in for good measure—Spradlin’s Blood Riders has Hollister joining up with real-life historical figures Samuel Colt and Alan Pinkerton and one of horror literature’s most famous monster hunters (Abraham Van Helsing from Bram Stoker’s Dracula) to rid the West of the undead scourge once and for all.

Michael P. Spradlin is the author of the New York Times bestseller It's Beginning to Look a Lot Like Zombies!, Every Zombie Eats Somebody Sometime, and Jack and Jill Went Up to Kill, as well as several children's picture books, the novels and manga volumes in the Spy Goddess series, and the Youngest Templar novels. He lives in Michigan with his family.

“Strap on your six-shooter and saddle your horse, you’re in for the ride of your life.”
— James Rollins, NYT bestselling author of The Devil Colony

“Blood Riders is a novel like you’ve never read before -- part Western and part horror -- and one-hundred percent sweet excitement. It’s vivid and high-velocity, too. I couldn’t put it down!”
— T. Jefferson Parker, New York Times Best Selling author of The Jaguar and The Border Lords

“BLOOD RIDERS by Michael P. Spradlin is a thrill ride of a novel! I was turning the pages so fast I barely had time to catch my breath. Spradlin’s bold, fast-paced and engaging style makes BLOOD RIDERS a new classic!”
— Teresa Medieros, New York Times bestselling author of GOODNIGHT TWEETHEART

” The final showdown convincingly resolves all the plot threads and provides fans of the vampire western genre a delightful read.”
— Publishers Weekly
or
Not Currently Available for Direct Purchase
Copyright © 2020 American Booksellers Association