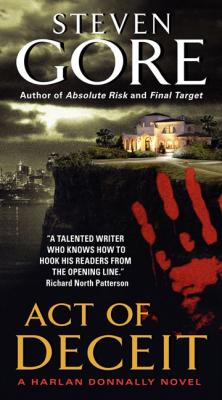 “A talented writer who knows how to hook his readers from the opening line.” —Richard North Patterson

Author Steven Gore burst onto the international thriller scene with Final Target (“James Bond for grownups” —Cornelia Read) and solidified his reputation as one of the genre’s most exciting new voices with Absolute Risk (“A truly thrilling thriller” —San Jose Mercury News). With Act of Deceit, Gore boldly enters the crime fiction domain of Harlan Coben, Robert B. Parker, Stuart Woods, and Robert Crais, and immediately proves he can stand tall with the best of them. A heart-racing masterwork of mystery, thrills, and suspense that introduces a phenomenal new series protagonist, Harlan Donnally, Act of Deceit plunges the ex-San Francisco PD detective-turned-café owner into a deadly morass of murder, sex trafficking, and church corruption as he seeks the dark truth about the death of a sister of a dying friend.